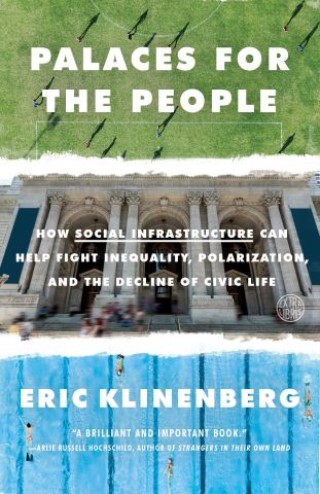 Palaces for the People

How Social Infrastructure Can Help Fight Inequality, Polarization, and the Decline of Civic Life

“A comprehensive, entertaining, and compelling argument for how rebuilding social infrastructure can help heal divisions in our society and move us forward.”—Jon Stewart

NAMED ONE OF THE BEST BOOKS OF THE YEAR BY NPR • “Engaging.”—Mayor Pete Buttigieg, The New York Times Book Review (Editors’ Choice)

We are living in a time of deep divisions. Americans are sorting themselves along racial, religious, and cultural lines, leading to a level of polarization that the country hasn’t seen since the Civil War. Pundits and politicians are calling for us to come together and find common purpose. But how, exactly, can this be done?

In Palaces for the People, Eric Klinenberg suggests a way forward. He believes that the future of democratic societies rests not simply on shared values but on shared spaces: the libraries, childcare centers, churches, and parks where crucial connections are formed. Interweaving his own research with examples from around the globe, Klinenberg shows how “social infrastructure” is helping to solve some of our most pressing societal challenges. Richly reported and ultimately uplifting, Palaces for the People offers a blueprint for bridging our seemingly unbridgeable divides.

LONGLISTED FOR THE ANDREW CARNEGIE MEDAL FOR EXCELLENCE IN NONFICTION

“The aim of this sweeping work is to popularize the notion of ‘social infrastructure'—the ‘physical places and organizations that shape the way people interact'. . . . Here, drawing on research in urban planning, behavioral economics, and environmental psychology, as well as on his own fieldwork from around the world, [Eric Klinenberg] posits that a community’s resilience correlates strongly with the robustness of its social infrastructure. The numerous case studies add up to a plea for more investment in the spaces and institutions (parks, libraries, childcare centers) that foster mutual support in civic life.”—The New Yorker

“Palaces for the People—the title is taken from the Scottish-American industrialist and philanthropist Andrew Carnegie’s description of the hundreds of libraries he funded—is essentially a calm, lucid exposition of a centuries-old idea, which is really a furious call to action.”—New Statesman

Eric Klinenberg: Eric Klinenberg is the Helen Gould Shepard Professor in the Social Sciences and director of the Institute for Public Knowledge at New York University. He is the coauthor of the #1 New York Times bestseller Modern Romance, and author of the acclaimed books Going Solo, Heat Wave, and Fighting for Air. He has contributed to The New Yorker, The New York Times Magazine, Rolling Stone, Wired, and This American Life.