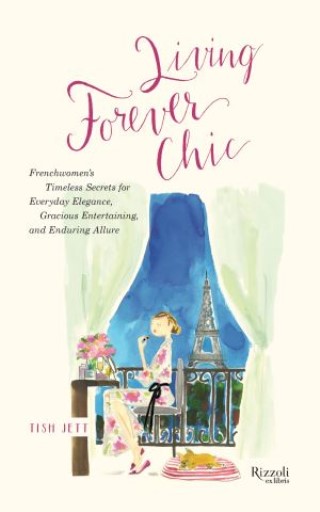 Why French women of a certain age are the consummate hostesses, homemakers, and style icons--and how you can be, too. Frenchwomen--particularly those 40 and over--are role models for stylish and gracious living, what the French call l'art de vivre.

American-born fashion journalist Tish Jett, who has studied these women for years, shared their beauty secrets in her first book, Forever Chic. Now she explores why Frenchwomen of a certain age are master hostesses and homemakers, expert practioners of les bonnes manières as well as everyday elegance, savoir-faire, and as a result, la joie de vivre.
Jett explains how to entertain like a Frenchwoman, including a glimpse into the typical French larder from which a delicious meal can be thrown together with ease, to detailed instruction on laying a beautiful table and crafting a perfect cheese plate (did you know that when cutting from a wedge of cheese, slice from the back to the point, which is the "heart" of the cheese, and as such considered the best part and not to be lopped off so others cannot enjoy it). She explores everyday style and elegance, disclosing how to create that special bien dans sa peau (to feel good about oneself) sensation so coveted by Frenchwomen. Jett also shares the importance of discipline, which goes hand in hand with beauty--a well-ordered closet, be it for clothes or linens, translates to easy everyday elegance.
With tips on adjusting your beauty and style regimes seasonally, charmingly packaged with color illustrations, Living Forever Chic is a delightful gift for the Francophile in your life.

Tish Jett: For years, Tish Jett was a fashion editor for The New York Daily News Tonight edition (under Clay Felker), the style and fashion editor of the Detroit Free Press, and before that, Midwest Bureau Chief for Women's Wear Daily and W (and at the same time she was the Midwest correspondent for Architectural Digest). Her career in these positions took her to Europe two to four times a year. When the opportunity to become Style Editor of the International Herald Tribune in Paris was presented to her, she quit her job in New York, packed up her daughter and dogs, and decided to see what fate had in store. While working for the Herald Tribune, she was approached by the Chicago Tribune to be a correspondent from Paris and later -- still working for both "Tribunes" -- she became the last editor of American Elle before its popularity proved the magazine could happily live in New York City. Instead of moving back to New York with Elle, she decided love was more important than the plans she had originally had for her career. So she married her Frenchman and has continued blogging about Frenchwomen of a certain age and their style secrets at tishjett.com.