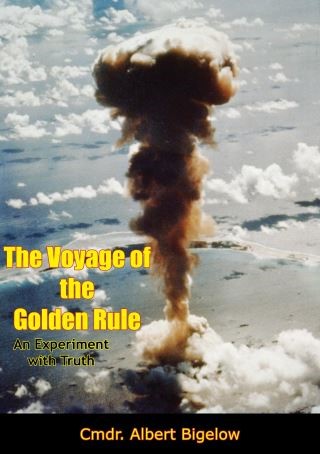 The Voyage of the Golden Rule

An Experiment with Truth

In late March of 1958 four men set sail in a thirty-foot ketch, the Golden Rule, for the nuclear-bomb-testing area in the Marshall Islands. Their sailing was a non-violent protest to the continuation of such tests—tests which could threaten present and future generations with the deadly effects of fallout.

Albert Bigelow, master and captain of the Golden Rule, has written a full and articulate account of this project—the reasons behind the sailing, his own difficult personal decision, the two voyages from San Pedro, California, and the government’s opposition that resulted in the imprisonment of captain and crew in Hawaii. He also gives a record of the navigational details of the voyage, including their difficulties in a storm the Coast Guard described as “one of the worst in twenty years.” The reader is given a clear understanding of the theory of non-violence and the author describes some of the other efforts made by the Committee for Non-Violent Action Against Nuclear Weapons and by the crew who later sailed another vessel, the Phoenix, right into the testing area.

First published in 1959, THE VOYAGE OF THE GOLDEN RULE is an honest and inspiring record of a remarkable voyage and the men who made it. It is an important account of a noble action, one which focused the attention of the world and its governments on a problem that must be solved immediately if mankind is to survive. Above all, it is a calm and eloquent plea for peace on earth by a man who felt that it was “time to do something about peace, not just talk about peace.”

Albert Bigelow: Albert Smith Bigelow (1 May 1906 - 6 October 1993) was a pacifist and former U.S. Navy Commander, who came to prominence in the 1950s as the skipper of the Golden Rule, the first vessel to attempt disruption of a nuclear test in protest against nuclear weapons.

Born in Walpole, Massachusetts in 1906, he was the son of Albert Francis Bigelow (1880-1958), a partner in the Boston law firm Warren, Hogue & Bigelow (1908-1914), and Gladys Williams. He graduated from Harvard University in 1929, as well as the Massachusetts Institute of Technology.

Prior to his involvement in the peace movement, he served in the U.S. Navy during WWII, first as commander of a submarine chaser patrolling the Solomon Islands, and later as captain of the destroyer escort USS Dale W. Peterson. On August 6, 1945, Bigelow was on the bridge of the Peterson as it sailed into Pearl Harbor, when he heard news of the explosion of the atomic bomb over Hiroshima. He resigned from the U.S. Naval Reserve a month before becoming eligible for his pension.

Bigelow joined the Religious Society of Friends in 1955. It was through this society that he and his wife Sylvia came to house two of the Hiroshima Maidens: young Japanese women, severely disfigured by the effects of the atomic bomb, who were brought to the United States to undergo plastic surgery in 1955. In February 1958, Bigelow set sail for the Eniwetok Proving Ground, the Atomic Energy Commission’s atmospheric test site in the Marshall Islands, in the Golden Rule, a 30-foot (9 m) ketch. He documented his journey in his book Voyage of the Golden Rule, published in 1959.

Bigelow continued to take part in non-violent protests during the late 1950s and early 1960s, and was a participant in the Freedom Rides organized by the Congress on Racial Equality in 1961. In his later years, he was a trustee to The Meeting School, a Quaker school in Rindge, New Hampshire.