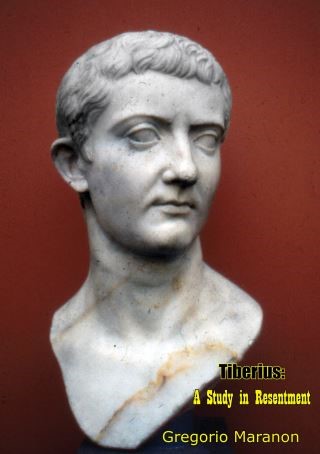 A Study in Resentment

Originally published in its original Spanish language in 1939 and first translated into English in 1956, this is an unforgettable biography of the Roman Emperor Tiberius (42 B.C.-37 A.D.), who succeeded Augustus as emperor, and his pathological resentment of one and all.

Gregorio Maranon: GREGORIO MARAÑÓN Y POSADILLO (19 May 1887 - 27 March 1960) was a Spanish physician, scientist, historian, writer and philosopher. Born in Madrid, Spain, Marañón is considered one of the most brilliant Spanish intellectuals of the 20th century. He received a Special Recognition award for his degree in 1910, and Special Recognition for his Doctorate in 1911, having already published several medical articles in various journals. His work as a scientist and researcher focused mainly on the study of infectious diseases and endocrinology, which gained him great international prestige. Marañón first biographical historical essays were published in the 1930s: Henry IV of Castile and His Times (1930), Amiel: A Study on Shyness (1932), and Tiberius: A Story of Resentment (1939). He also published moral essays, including Three Essays on Sex Life (1926). He married Dolores Moya in 1911, and the couple had four children: Carmen, Belén, María Isabel and Gregorio. Marañón died in Madrid in 1960, at the age of 72.

Sir Ronald Syme, OM, FBA (March 11, 1903 - September 4, 1989) was a New Zealand-born historian and classicist. Long associated with Oxford University, he is widely regarded as the 20th century’s greatest historian of ancient Rome. His great work was The Roman Revolution (1939), a masterly and controversial analysis of Roman political life in the period following the assassination of Julius Caesar. Prof. Syme was knighted in 1959.