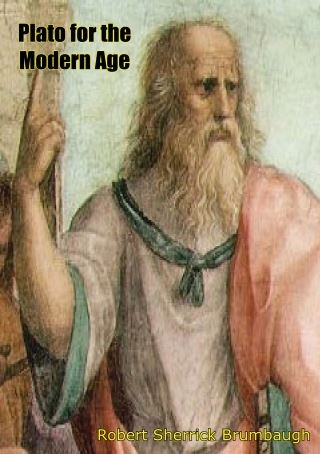 Plato for the Modern Age

“PLATO IS GENERALLY regarded as the most brilliant speculative mind the West has produced. Some philosophers have preferred the greater patience and methodical procedure of Aristotle, Aquinas, or more recent analytic philosophy; others have argued that the Platonic vision did not do justice to our intuitions of duration and existence; but no one will ever deny the continuing inspiration that Western philosophy has gained from Plato….”—Prof. Robert S. Brumbaugh, Introduction

Originally published in 1962 and the first comprehensive work of its kind since Alfred Edward Taylor’s Plato in 1908, Professor Robert S. Brumbaugh’s Plato for the Modern Age represents a one-volume introduction to Plato’s biography and includes a complete account of his works.

Plato for the Modern Age, like Plato’s life and works, is divided into three major periods: a youthful commitment to philosophical inquiry and its defense, a mature systematic vision, and a final careful criticism and application of the system Plato had envisaged. For each of these main periods, Prof. Brumbaugh first introduces Plato at different stages of his career, and provides an account of the dialogues he wrote: the characters who enact these dramatic intellectual conversations and confrontations, the theme they explore with its major variations, and “some internal evidence that our biographical notions are correct in assumptions such as that a visit to Tarentum would have led to new confidence in mathematics, one to Syracuse to less confidence in unprincipled dictatorship.”

Plato for the Modern Age was designed as an introductory text for the beginner student of philosophy, and it will also greatly appeal to the general reader.

Robert Sherrick Brumbaugh: Robert S. Brumbaugh (December 2, 1918 - July 14, 1992) was a Professor of Philosophy at Yale University and a former president of the Metaphysical Society of America. He was also the author of numerous books and articles on classical philosophy and metaphysics.

Prof. Brumbaugh joined the Yale faculty in 1951 after completing his education at the University of Chicago and teaching at Bowdoin College and Indiana University. He was a Fulbright scholar, a research fellow in the American School of Classical Studies in Athens, Greece, and a member of the Metaphysical Society of America and the American Philosophical Association.

Brumbaugh was married to Ada Zarbell Steele, and together the couple had two daughters, Susan and Joanna, and a son, Robert. Brumbaugh lived in Hamden for 40 years. He died in New Haven, Connecticut in 1992, at the age of 73.