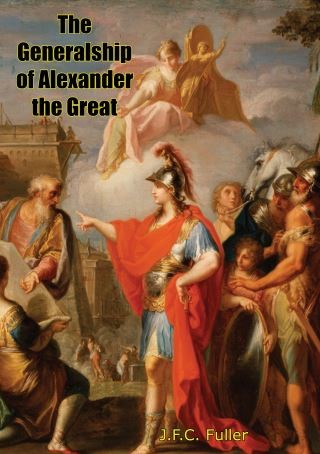 The Generalship of Alexander the Great

“Of all General Fuller’s brilliant books, this is the masterpiece.”—B. H. Liddell Hart

In his brief and meteoric life (356-323 B.C.), the greatest of all conquerors redirected the course of world history. Here, General J. F. C. Fuller, one of the premier military historians of the twentieth century, vividly portrays the astonishing successes of Alexander the Great, focusing on his brilliant battle strategies and his political savvy.

The first half of the book, “The Record,” describes—in Fuller’s trademark concise and gripping style—Alexander’s character and training, the structure of his army, and the geography of the world that determined the strategy of conquest. “The Analysis” dissects the great battles, from Granicus to Hydaspes, and concludes with two chapters on Alexander’s statesmanship.

In clear, spirited prose. Fuller illuminates the many facets of Alexander’s genius and the enduring legacy of his empire.

He was a highly prolific author whose ideas reached army officers and the interested public. He explored the business of fighting, in terms of the relationship between warfare and social, political, and economic factors in the civilian sector, and emphasized the potential of new weapons, especially tanks and aircraft, to stun a surprised enemy psychologically.

A highly controversial figure in British politics due to his support for the organized fascist movement, Fuller was also an occultist and Thelemite who wrote a number of works on esotericism and mysticism.

Born in 1878 at Chichester in West Sussex, the son of an Anglican clergyman, he trained at the Royal Military College in Sandhurst from 1897-1898. He was commissioned into the 1st Battalion of the Oxfordshire Light Infantry (the old 43rd Foot) and served in South Africa from 1899-1902. He served as an adjutant to the 2nd South Middlesex Volunteers and helped form the 10th Middlesex.

During WWI, he was a staff officer with the Home Forces and with 7 Corps in France, and from 1916 in the Headquarters of the Machine-Gun Corps’ Heavy Branch (later Tank Corps). He helped plan the tank attack at the 1917 Battle of Cambrai and the tank operations for the Autumn offensives of 1918.

After the war, he became military assistant to the chief of the Imperial General Staff in 1926, was promoted to major-general in 1930, and retired in 1933 to devote himself entirely to writing. He served as a reporter during the Italian invasion of Ethiopia (1935) and the Spanish Civil War (1936-39). His ideas on mechanized warfare continued to be influential in the lead-up to WWII.

Fuller died in Falmouth, Cornwall in 1966.