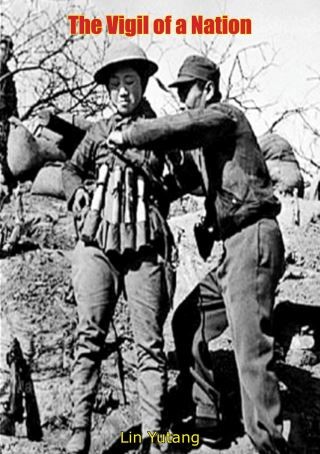 The Vigil of a Nation

For the second time Lin Yutang has gone deep into wartime China and has come out with much to tell. No foreign writer, and few Chinese, could have had such a chance to see past the smoke of war, through the clouds of gossip, and beneath the heaving surface of economic and political change. And Lin Yutang, as always, is unafraid of the truth.

His sense of history, joined with his spirit of eager inquiry, led him to watch for the old China along with the new. Only China presents such a study in contrasts, rich alike with romance and with hope for the future. Sitting on the ruins of a Tang palace and telling us tales of ancient times, Lin Yutang looks down at an Industrial Co-operative group working in the gully below and dreams of the China that is to be. He describes a cotton mill, all underground, three miles of whirring machines in tunnels bored beneath the protecting hills; and further west, a vast irrigation system built two thousand years ago and still working perfectly.

Lin Yutang: Lin Yutang (October 10, 1895 - March 26, 1976) was a Chinese writer, translator, linguist, philosopher and inventor. His informal but polished style in both Chinese and English made him one of the most influential writers of his generation, and his compilations and translations of classic Chinese texts into English were bestsellers in the West.

Born in the town of Banzai, Pinghe, Zhangzhou, Fujian, Lin studied for his bachelor’s degree at St. John’s University in Shanghai. He abandoned a half-scholarship to continue study for a doctoral degree at Harvard University due to financial restrictions and moved to work with the Chinese Labor Corps in France and Germany, where he completed his doctoral degree in Chinese philology at the University of Leipzig. From 1923-1926 Lin taught English literature at Peking University.

His humor magazine, Lunyu banyuekan (The Analects Fortnightly, 1932-40, 1945-49) featured essays by prominent Chinese writers and attracted a wide readership. He was a key figure in introducing the Western concept of humor and coined the term youmo (humor) in 1924.

After 1935, Lin lived mainly in the U.S., where he became known as a “wise and witty” popularizer of Chinese philosophy and way of life. Lin’s first best sellers were My Country and My People (1935) and The Importance of Living (1937), written in English. His many works represent an attempt to bridge the cultural gap between the East and the West. He was nominated for the Nobel Prize in Literature in 1940 and 1950.

With his facility for both Chinese and English idiom, Lin presided over the compilation of a Chinese-English dictionary, Lin Yutang’s Chinese-English Dictionary of Modern Usage (1972), which contains a massive English index to definitions of Chinese terms. The work was undertaken at the newly founded Chinese University of Hong Kong.