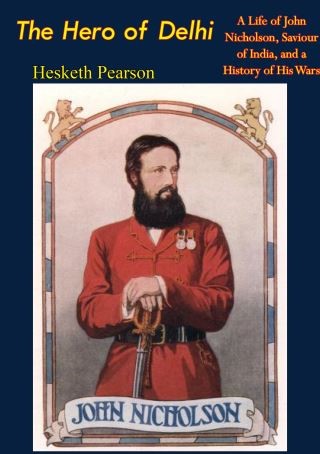 The Hero of Delhi

A Life of John Nicholson, Saviour of India, and a History of His Wars

An Irishman, like so many other great British generals, John Nicholson received a cadetship in the Bengal Infantry at the age of sixteen. Apart from one short visit to England, the rest of his life was spent in India. The Afghan and Sikh wars of the eighteen-forties brought out the titanic powers of a character that “flowered in action,” and before he was thirty, “Nikal Seyn” was a legend throughout India, a god to the Sikhs and to certain fakirs who called themselves Nikal-seynites, and a thorn in the side of incompetent and idle officials of the British Government. In an unquiet country where quick movement was the secret of military success against an elusive enemy, Nicholson’s energy, even more than his absolute personal courage, was the factor that made him the most powerful instrument of British policy in India. Passionately sincere, arrogantly self-confident, insubordinate without remorse when he saw cause, and always in the right, Nicholson provoked no ordinary emotions. He was loved, admired, feared, envied, and hated in the most violent degree.

The climax of his career was the Indian Mutiny. Very seldom in history have the man and the task matched each other so notably. “Mutiny is like small-pox,” he said. “It spreads quickly and must be crushed at once.” Not all his superiors thought the same, but when he had freed himself from the trammels of authority he saved the Punjab, and so India, by sheer exertion. It is a breathless story of march, surprise, and counter-march, thrusting quickly into the hills and as quickly back to Peshawar, the danger-spot. When that situation was under control he marched to Delhi, where his arrival transformed the rôle of the British troops from besieged to assaulters. The assault succeeded but cost Nicholson his life. He was thirty-four years old, a general, and “the idol of all soldiers.”

Born in Hawford, Claines, Worcestershire to Thomas Henry Gibbons Pearson, a farmer, and the former Amy Mary Constance Biggs, the family moved to Bedford in 1896. He was educated at Orkney House School for five years, followed by Bedford School. He was a passionate reader of Shakespeare’s plays, and a frequent theatre-goer. When his brother’s business faced bankruptcy, he applied for a job with Herbert Beerbohm Tree, and began acting with that theatrical entrepreneur’s company in 1911. A year later, he married Gladys Gardner, one of the company’s actresses.

At the outbreak of World War I, he volunteered for the Army Service Corps and was sent to Mesopotamia and was awarded the Military Cross for his services. After the war, he returned to the stage.

He began to write his first book during World War I in order to keep his mind occupied during the long Mesopotamian afternoons when the temperature stood at 130 degrees. His first book, Modern Men and Mummers, published in England and America in 1921, dealt with a number of celebrities he had known. His first biography, Doctor Darwin, about his maternal ancestor, Erasmus Darwin, was published in 1930 and secured his position in literature.