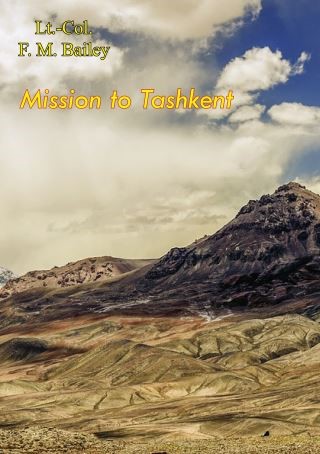 Colonel F. M. Bailey, whose extraordinary adventures are told here, was long accused by Moscow of being a British master-spy sent in 1918 to overthrow the Bolsheviks in Central Asia.

As a result, he enjoyed many years after his death an almost legendary reputation there—that of half-hero, half-villain.

In this remarkable book, which was first published in he tells of the perilous game of cat-and-mouse, lasting sixteen months, which he played with the Bolshevik secret police, the dreaded Cheka. At one point, using a false identity, he actually joined the ranks of the latter, who unsuspectingly sent him to Bokhara to arrest himself.

Told with almost breathtaking understatement, Bailey’s narrative—set in a region once more back in the headlines—reads like vintage Buchan.

“…one of the best books about secret intelligence work ever written.” Peter Hopkirk.

Lt.-Col. F. M. Bailey: Frederick Marshman Bailey CIE (3 February 1882 - 17 April 1967) was a British explorer and intelligence officer, and one of the last protagonists of The Great Game—the fight for supremacy between the Russians and the British Empire along the Himalayas.

Born in Lahore, India, the son of an officer in the Royal Engineers of the British Army, he was educated at Edinburgh Academy, Wellington College (1895-1899) and the Royal Military College, Sandhurst, from where he was commissioned onto the Unattached List of the Indian Army in 1900. He was admitted to the Indian Army in 1901 and attached to the 17th Bengal Lancers. He was promoted to lieutenant in 1902 and transferred to the 32nd Sikh Pioneers in 1903.

During a mission in Sikhim he studied Tibetan and became so proficient that he accompanied Francis Younghusband in his 1904 invasion of Tibet. He transferred to the Foreign & Political Department in 1906 and served as the British Trade Agent in Gyantse (Tibet) at intervals between 1905-1909. He was promoted Captain in 1908 and served during the operations in the Abor country 1911-1912.

In 1914 he was appointed as a Captain with the 6th Reserve Regiment of Cavalry at Dublin and served on the western front in 1915 with the 34th Sikh Pioneers. He also fought at Gallipoli, serving with the 5th Gurkhas, and was appointed a Companion of the Most Eminent Order of the Indian Empire in 1915.

He then served as Political Officer on the North West Frontier during the Mohmand Operations 1916-1917, in South Persia until 1918, and in Chinese & Russian Turkistan as a temporary Lieutenant-Colonel from 1918-1920. It was during this time that he traveled to Tashkent in Central Asia on one of his best-known adventures, to discover the intentions of the new Bolshevik government, specifically in relation to India, and was instrumental in organising support for the Basmachi Revolt.