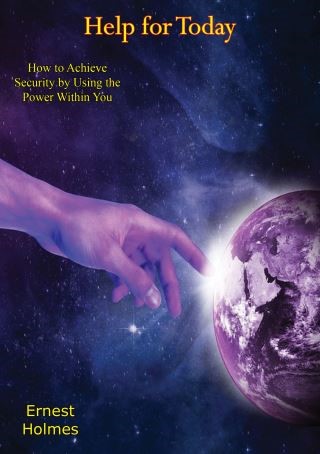 How to Achieve Security by Using the Power Within You

This book by Dr. Ernest Holmes, the Founder of the Religious Science Movement, and Dr. William Hornaday, of the same faith and one of the most popular ministers of our country today, passes the ammunition. It teaches a definite, specific Practice of the Power of God. Here is ammunition for the people of this country and this year, as modern as guided missiles, as far-reaching as rockets to the moon. Founded as all science must be, upon Truth which changes not, it is a new revelation of the God-Power, the Higher-Power that has always been available to man.

“IN this book there is a vital answer to the demand many of us have been making upon the spiritual leadership of our times.

‘Please,” we have been saying, ‘pass the ammunition.’

Because today we are in the midst of the greatest battle mankind has ever known. In this fight for world supremacy, we stand opposed to any power which declares that it is without faith in any God at all.

No longer can a spiritual faith stand without works. We will not settle now, cannot settle now, for uplifting quotations and tenets and creeds that have nothing to do with real life and its present startling advances in material science, its cold wars and constant threats.

We must now use the POWER that is latent in our spiritual science. We must now learn how to make it work.

Ernest Holmes: ERNEST SHURTLEFF HOLMES (January 21, 1887 - April 7, 1960) was an American New Thought writer, teacher, and leader. He was the founder of a Spiritual movement known as Religious Science, a part of the greater New Thought movement, whose spiritual philosophy is known as “The Science of Mind.” Born in Lincoln, Maine, to Anna Columbia (Heath) and William Nelson Holmes, Holmes left school and his family for Boston at the age of 15. From 1908-1910 he attended the Leland Powers School of Expression in Boston, where he was introduced to Mary Baker Eddy’s Science and Health, as well as Christian Science. In 1912 Holmes joined his brother Fenwicke, a Congregationalist minister, in Venice, California; the brothers studied another New Thought teaching, Divine Science, and Holmes was an ordained Divine Science Minister. In 1916 Holmes was invited to speak at the Metaphysical Library in Los Angeles, leading to further engagements and a nationwide tour. In 1919 he published his first book, The Creative Mind, and toured for almost a decade before settling in L.A. to complete his major work, The Science of Mind, which was published in 1926. Numerous other metaphysical books followed, and he founded the Science of Mind magazine in 1927. He died in L.A. in 1960, aged 73.