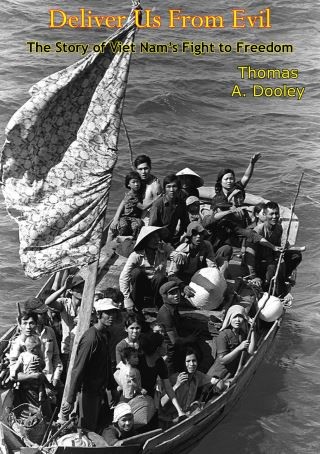 Deliver Us From Evil

The Story of Viet Nam’s Fight to Freedom

This is the true, first-hand narrative of a twenty-seven-year-old Navy Doctor who found himself suddenly ordered to Indo-China, just after the tragic fall of Dien Bien Phu. In a small international compound within the totally Communist-consumed North Viet Nam, he built huge refugee camps to care for the hundreds of thousands of escapees seeking passage to freedom. Through his own ingenuity and that of his shipmates, and with touching humor, he managed to feed, clothe, and treat these leftovers of an eight-year war. Dr. Dooley “processed” over 600,000 refugees down the river and out to sea on small craft, where they were transferred to U.S. Navy ships to be carried to the free areas of Saigon.

The “Bac Sy My,” as they called the American doctor, explains how he conquered the barriers of custom, language and hate to become, as the President of Viet Nam said of him, “Beloved by a whole nation.”

Thomas A. Dooley: Thomas Anthony Dooley III (January 17, 1927 - January 18, 1961) was an American physician known for his activities in Southeast Asia at the outset of the Vietnam War. While serving as a physician in the U.S. Navy and afterwards, he became celebrated for his humanitarian and anti-communist political activities.

Born in St. Louis, Missouri, and raised in a prominent Roman Catholic Irish-American household, Dr. Dooley enlisted in the U.S. Navy’s corpsman program in 1944, serving in a naval hospital in New York. After graduating from St. Louis University Medical School in 1953, he served as a medical officer in the U.S. Navy and completed his residency in California and then Japan. In 1954 he was assigned to the USS Montague, which was traveling to Vietnam to evacuate refugees. While with the Navy, he organized refugee camps in Vietnam where he developed strong anti-communist sentiment. His experiences there are related in his first book, Deliver Us from Evil: The Story of Vietnam’s Flight to Freedom. In 1956 he left the navy to start a private, mobile medical unit in Laos.

Dr. Dooley helped found the Medical International Cooperative Organization (MEDICO), a non-profit organization dedicated to providing medical aid for developing countries. He personally raised nearly $1 million for MEDICO through his television appearances, lecture tours and books, including The Edge of Tomorrow and The Night They Burned the Mountain, both about his experiences in Laos.

In 1959, Dr. Dooley returned to the U.S. for cancer treatment. He died in 1961 from malignant melanoma, aged just 34. He was awarded the Legion of Merit, the National Order of Vietnam, and posthumously awarded a Congressional Gold Medal.