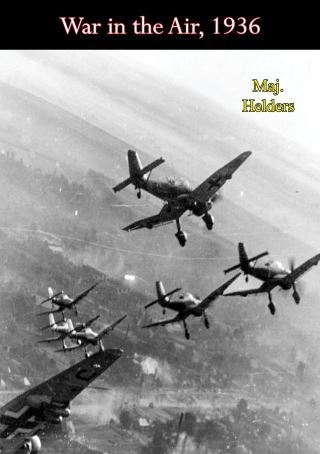 In War in the Air, 1936, which was first published in English in 1932, author Robert Knauss fantasizes about a confrontation between England and France. Writing under the pseudonym “Major Helders,” and using detailed descriptions of battles, strategies, and weaponry, Knauss’ aim is for the reader to realize that air power (in general) and ‘flying fortress’ bombers (in particular) would decide the outcome of the next war.

In this novel, the hero is the English air force commander Brackley, a carbon copy of the imaginary German leaders in other right-wing prophecies: firm, mysterious, infallible. In times of crisis, he surveys the situation “with lightning speed.” His war is one of movement, of risk-taking, of annihilation. Modern airplane technology allows him to carry out a style of warfare that fits his chivalric, warrior spirit. Only for an instant does he pity the population of Paris as his planes pour bombs over the city in a surprise attack. Pity, though, is not a virtue in the nationalist mind, though Vernichtungswille [the will to annihilate] is…

Born in Stuttgart, Germany, Knauss joined the infantry regiment “Emperor Frederick, King of Prussia” (7. Württembergisches) Nr. 125 in his hometown in 1910. He was appointment as a cadet officer in 1911 and soon promoted to lieutenant. At the outset of WWI he fought on the Western front as platoon leader, and began flying in 1915. He then joined the staff of the 52nd Reserve Division in 1918 and was promoted to captain that same year. He was awarded both classes of the Iron Cross for his services.

Knauss remained with the Division until 1919 and was active at the Wehrmachtministerium until his retirement in 1920. He then went on to study economics and constitutional law at the Friedrich-Wilhelms-University in Berlin and obtained his doctorate. In the years that followed, he worked for Deutsche Lufthansa AG (DLH), among others, where he became a member of the Executive Board.

Knauss was part of the Himmeroder group of high-ranking officers, who worked out the basics for the rearmament of the Federal Republic of Germany in 1950.

CLAUD W. SYKES (1883-1964) was an English actor, author and translator. A close friend of the famous Irish novelist James Joyce, he acted in Sir Herbert Beerbohm Tree’s company and in 1918 founded The English Players as artistic director, with Joyce as business manager. He translated a number of German books into English, including M. E. Kähnert’s Jagdstaffel 356 (1935) and Lili Körber’s Life in a Soviet Factory (1933). He died in 1964.