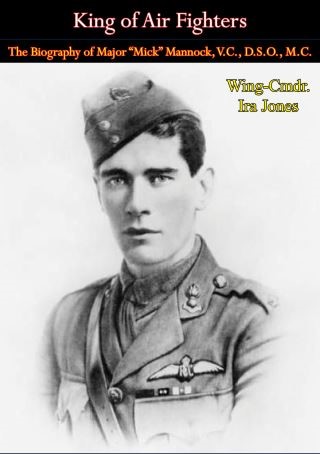 Major “Mick” Mannock, VC, was the top-scoring RAF air ace of the First World War, an almost legendary figure who personified the bravery and modesty that came to be expected of aerial heroes. While other aces of that war became better known, Mannock in his own quiet way topped them all, with an official tally of 73 victories by the time of his death. On the award of his posthumous VC the London Gazette described him as “an outstanding example of fearless courage, remarkable skill, devotion to duty and self-sacrifice that has never been surpassed.”

King of Air Fighters is an exciting account of Mannock’s character and career by another great air ace. For author “Taffy” Jones himself ranks sixth in the British list of First World War aces with 41 victories. This is a tale of adventure, courage and gallantry told with an experienced insider’s understanding of the feelings and psychology of the air aces, and with a thorough analysis of aerial combat techniques.

Born at Woolstone Farm, near St. Clears, Carmarthenshire, he enlisted in the Territorial Army in 1913, but was soon transferred into the newly established Royal Flying Corps, serving as an air mechanic on ground duties (where he earned the Military Medal) before volunteering for flying duties as an Observer. Jones commenced pilot training in 1917 after being commissioned. He joined No. 74 Squadron after completing his training and became a flight commander in 1918. After the Armistice he became Commanding Officer of No. 74 Squadron until it was disbanded in 1919.

Throughout his service at No. 74 Squadron, Jones won several awards and decorations, including the Military Cross, the Distinguished Flying Cross and bar and the Distinguished Service Order. He recorded 37 victories in just 3 months whilst flying the Royal Aircraft Factory S.E.5 during WWI.

After retiring in 1936, Jones was recommissioned after the outbreak of WWII and flew briefly during the Battle of Britain. After retiring again at the end of WWII, he returned to St. Clears in Wales and a career in the Ministry of Pensions, a British government ministry responsible for the administration and delivery of welfare benefits. He authored three books on the R.F.C. and R.A.F.: King of Air Fighters, a biography of Edward Mannock; Tiger Squadron, a history of 74 Squadron; and An Air Fighter’s Scrapbook.