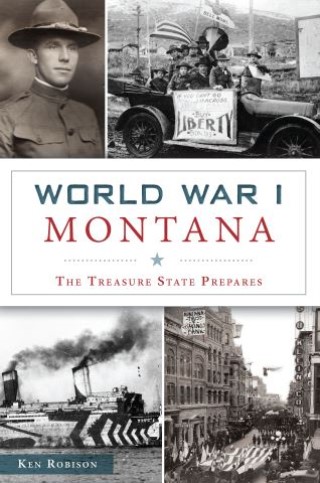 Montana's cowboys, miners, foresters, farmers and nurses entered World War I in April 1917 under the battle cry that would resonate on the battlefields in France--"Powder River, Let 'Er Buck!" Montana men served in a greater percentage per capita than any other state. Hundreds responded to the call, including local women and minorities, from the nation's first congresswoman, Jeannette Rankin, to young women serving as combat nurses on the front lines. Additionally, the state provided vital supplies of copper and wheat. Learn what role celebrities like "cowboy artist" Charlie Russell played in the war and how Montanans mobilized, trained and deployed. Acclaimed historian Ken Robison uncovers new and neglected stories of the Treasure State's contributions to the Great War.

Ken Robison: Native Montanan Ken Robison is historian at the Overholser Historical Research Center and for the Great Falls/Cascade County Historic Preservation Commission and is active in historic preservation throughout central Montana. He is a retired navy captain after a career in naval intelligence. The Montana Historical Society honored Ken as "Montana Heritage Keeper" in 2010.