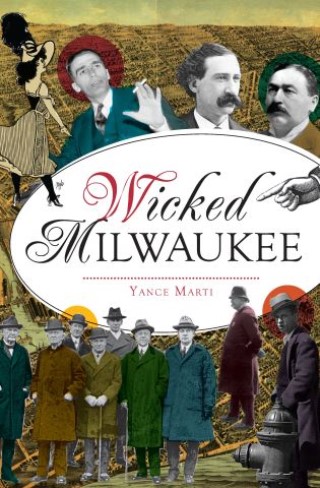 The Cream City of yesteryear was a dingy haven for scofflaws and villains. Red-light districts peppered downtown's landscape, but none had the enduring allure of River Street, where Kitty Williams and Mary Kingsley operated high-class brothels. Chinese opium dens flourished in the backrooms of laundries. The demise of the Whiskey Ring brought down local distillers in a nationwide scandal that nearly reached the Oval Office. As a result, Police Chief John Janssen and the Committee to Investigate White Slavery and Kindred Vice waged a protracted battle to contain the most brazen offenses. Local historian and founder of OldMilwaukee.net Yance Marti uncovers the rough and rowdy blackguards who once made Milwaukee infamous.

Yance Marti: Yance Marti works as a civil engineer for the City of Milwaukee. In his spare time, he researches and writes about the history of the city. In 2007, he developed OldMilwaukee.net to share the fascinating stories he found in newspaper archives. The site also presents the architectural history of downtown and provides a forum for discussing local history. In assistance with Historic Milwaukee Inc., he authored Missing Milwaukee in 2011. It showcased the work of two local photographers who documented downtown buildings lost to demolition over the last several decades.