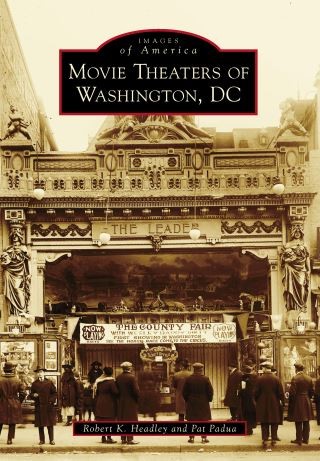 Movie Theaters of Washington, DC charts the storied history of motion picture exhibition in the nation's capital. In 1894, entertainment venues were repurposed to show newfangled moving images and continued to do so through the downtown heyday of such 1920s baroque movie palaces as the 3,400-seat Fox. In the late 20th century, shoebox theaters dotted the nearby suburbs. In a landscape that has transformed over the decades, majestic landmarks, such as the Uptown, which opened in 1936, remain and are still going strong, and theaters like the Warner survived the dark days of downtown's commercial decline to be repurposed as thriving stage venues. While certain favorites have fallen to the wrecking ball, the Washington area has seen, along with a rejuvenated downtown, a vibrant movie scene for both mainstream blockbusters and art house fare with the Regal Gallery Place multiplex and more new theaters to come.

Robert K. Headley: Longtime movie theater historian Robert K. Headley presents highlights from his photograph collection, which documents the grand architecture and excitement of theatrical venues. With local movie critic Pat Padua, this book shares fond experiences of going to the movies in what was once and will again be a great theater town.