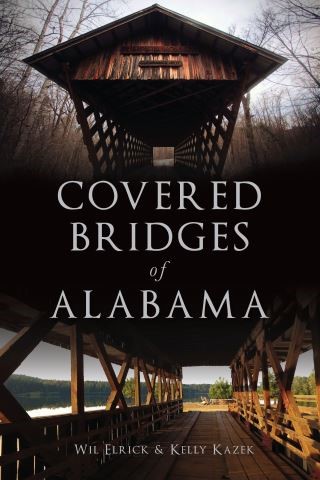 Alabama's covered bridges are reminiscent of a more romantic time, when people rode in horse-drawn buggies and couples stole kisses beneath their roofs. But they are also keepers of history--structures built by former slaves and Civil War soldiers. Such places are steeped in legend, including tales of ghostly children and the hanging of a sheriff turned outlaw. Just eleven historic covered bridges survive in Alabama--the oldest dating to the 1850s--but dozens of more recently constructed spans dot the landscape. Wil Elrick and Kelly Kazek provide photos and detailed information on more than fifty Alabama bridges, reveal the fate of the state's lost bridges and delve into the haunting legends surrounding these nostalgic structures.

Wil Elrick: Kelly Kazek is a journalist, humor columnist and blogger. She is the author of nine other books, including two humor collections. She has won more than 180 state and national press awards and twice served as president of the Alabama Associated Press Media Editors. She lives in Huntsville, Alabama, with her husband, Wil Elrick. They travel Alabama's backroads together, seeking out quirky history, and have coauthored two books.

Wil Elrick hails from Guntersville in the northeastern part of Alabama. He is a writer and "weirdologist" who loves telling stories, whether as a tour guide to historic Huntsville or with friends around a campfire. He can often be found "off the beaten path" researching historical, weird or unusual tales. He lives in Huntsville, Alabama, with his wife, Kelly Kazek, with whom he has coauthored two books.