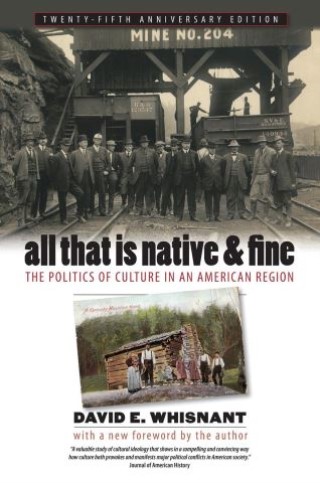 All That Is Native and Fine

The Politics of Culture in an American Region

In the American imagination, "Appalachia" designates more than a geographical region. It evokes fiddle tunes, patchwork quilts, split-rail fences, and all the other artifacts that decorate a cherished romantic region in the American mind. In this classic work, David Whisnant challenges this view of Appalachia (and consequently a broader imaginative tendency) by exploring connections between the comforting simplicity of cultural myth and the troublesome complexities of cultural history.

Looking at the work of ballad hunters and collectors, folk and settlement school founders, folk festival promoters, and other culture workers, Whisnant examines a process of intentional and systematic cultural intervention that had--and still has--far-reaching consequences. He opens the way into a more sophisticated understanding of the politics of culture in Appalachia and other regions. In a new foreword for this twenty-fifth anniversary edition, Whisnant reflects on how he came to write this book, how readers responded to it, and how some of its central concerns have animated his later work.