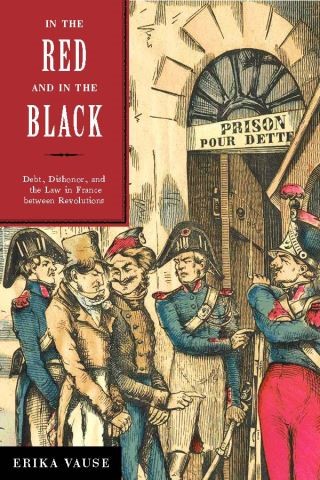 In the Red and in the Black

Debt, Dishonor, and the Law in France between Revolutions

"The most dishonorable act that can dishonor a man." Such is Félix Grandet’s unsparing view of bankruptcy, adding that even a highway robber—who at least "risks his own life in attacking you"—is worthier of respect. Indeed, the France of Balzac’s day was an unforgiving place for borrowers. Each year, thousands of debtors found themselves arrested for commercial debts. Those who wished to escape debt imprisonment through bankruptcy sacrificed their honor—losing, among other rights and privileges, the ability to vote, to serve on a jury, or even to enter the stock market.

Arguing that French Revolutionary and Napoleonic legislation created a conception of commercial identity that tied together the debtor’s social, moral, and physical person, In the Red and in the Black examines the history of debt imprisonment and bankruptcy as a means of understanding the changing logic of commercial debt. Following the practical application of these laws throughout the early nineteenth century, Erika Vause traces how financial failure and fraud became legally disentangled. The idea of personhood established in the Revolution’s aftermath unraveled over the course of the century owing to a growing penal ideology that stressed the state’s virtual monopoly over incarceration and to investors’ desire to insure their financial risks. This meticulously researched study offers a novel conceptualization of how central "the economic" was to new understandings of self, state, and the market. Telling a story deeply resonant in our own age of ambivalence about the innocence of failures by financial institutions and large-scale speculators, Vause reveals how legal personalization and depersonalization of debt was essential for unleashing the latent forces of capitalism itself.