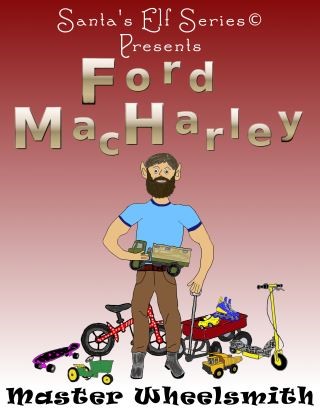 Cars, trucks, bicycles, tricycles, wagons, scooters...what do they have in common? They all have wheels! And Ford MacHarley is our Master Wheelsmith. So whether Santa needs a remote control car for Jacob or a new bicycle for Emma, he can count on Ford to get what he needs.

Come meet the elf that grants so many wishes for children. Ford loves to make children smile by granting their wishes on Christmas day. And Santa relies on Ford for many of the toys that fill his bag. Particularly if they have wheels!

Be sure to read Santa's personal message at the back of this book, so you know how to stay on his Nice List! Collect all the Santa's Elf Series© books to discover all the wonderful elves and magic that takes place at the North Pole.

As Santa, I also heard from parents about their frustrations trying to instruct their children in the primary lessons of life; such as picking up after themselves, being polite, sharing, brushing their teeth, and so on. So I put a special message from Santa Claus at the end of each story about each of these lessons. Even complex problems like bullying, showing gratitude, and listening to elders get addressed in these books. It never hurts to learn these lessons throughout the year.