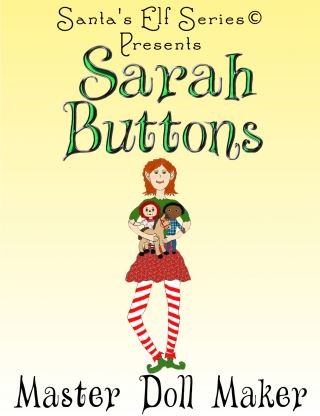 Cuddly animals and action figures and baby dolls, oh my! Where would Santa be if he didn't have tons of these at Christmas? Well, thankfully because of Sarah Buttons, he need not concern himself with that problem.

Sarah is our Master Doll Maker, and she creates all kinds of dolls, stuffed animals, a variety of heroes, soldiers, and so much more. With lyrical rhymes, adorable pictures, and a delightful storyline, Sarah is bound to be a favorite tale of your child's, year after year.

Santa reminds us that we should always be grateful for everything in our lives. It is reasonable and proper to desire more in life, but we should never forget to give thanks for what we already have. Santa's message is at the end of the story.

As Santa, I also heard from parents about their frustrations trying to instruct their children in the primary lessons of life; such as picking up after themselves, being polite, sharing, brushing their teeth, and so on. So I put a special message from Santa Claus at the end of each story about each of these lessons. Even complex problems like bullying, showing gratitude, and listening to elders get addressed in these books. It never hurts to learn these lessons throughout the year.