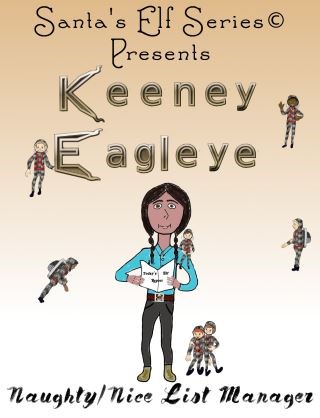 What if I told you hundreds of thousands of elves came and went to the North Pole every night? Add to this, one of Santa Claus' most important elves was keeping an eye on who is naughty and nice all day long.

Let us introduce you to Keeney Eagleye, Naughty/Nice List Manager of the North Pole. He is the one that the elves meet at night, as they fly up in their jet packs. After reporting to Keeney, he updates and manages the lists before bringing them to Santa.

With rhyme, stunning pictures, and a charming story, this book teaches children to behave whether at home, school, or with their friends. Just as importantly, Santa's message in this book is to always say your prayers and give your worries to God.

I also heard from parents about their frustrations trying to instruct their children in the primary lessons of life; such as picking up after themselves, being polite, sharing, brushing their teeth, and so on. So I put a special message from Santa Claus at the end of each story about each of these lessons. Even complex problems like bullying, showing gratitude, and listening to elders gets addressed in these books. It never hurts to learn these lessons throughout the year.