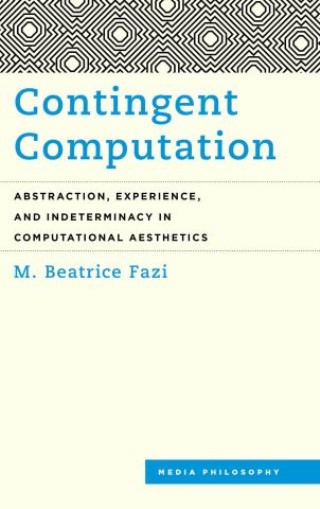 In Contingent Computation, M. Beatrice Fazi offers a new theoretical perspective through which we can engage philosophically with computing. The book proves that aesthetics is a viable mode of investigating contemporary computational systems. It does so by advancing an original conception of computational aesthetics that does not just concern art made by or with computers, but rather the modes of being and becoming of computational processes. Contingent Computation mobilises the philosophies of Gilles Deleuze and Alfred North Whitehead in order to address aesthetics as an ontological study of the generative potential of reality. Through a novel philosophical reading of Gödel’s incompleteness theorems and of Turing’s notion of incomputability, Fazi finds this potential at the formal heart of computational systems, and argues that computation is a process of determining indeterminacy. This indeterminacy, which is central to computational systems, does not contradict their functionality. Instead, it drives their very operation, albeit in a manner that might not always fit with the instrumental, representational and cognitivist purposes that we have assigned to computing.