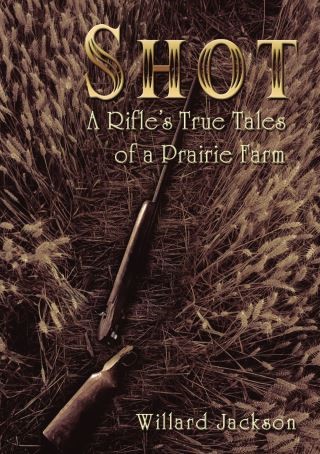 A Rifle’s True Tales of a Prairie Farm

Shot, a long-barrel, single-shot rifle, shares stories of intrigue, repose, and character—all as they occurred on Rudy’s farm on the North Dakota prairie. Rudy, himself an endearing soul, returns home from World War II with an artificial limb to operate a vibrant, diversified farm where even routine life is replete with adventures. Picture sheep escaping a burning building, ravaging hogs being loaded for butcher, bulls charging man and vehicles, and horses racing wide-eyed down a country lane. Picture also adventures from wild animals, prairie fires, brutal winters, and marauding dogs. Add in colorful hired men, unforgiving firearms, an even an Indian fight. Shot’s adventures arise from challenges on the farm. Rudy faces them with persistence, compassion, and creativity. His eldest son, Tommy, while dumfounded by Rudy’s resilience, has a variety of his own exploits. Both are consumed by the farm work while at the same time absorbed in perpetual drama, some of which is severe and debilitating. Only with a deep faith in God are they able to thrive. Altogether, Rudy’s farm pops like a television series, with episode after episode. Shot tells his tales—truth is stranger than fiction—with aplomb. He brings you in to feel present and engaged. You’ll enjoy Shot. You’ll never forget his farm.

Willard Jackson was raised on Rudy’s farm on the North Dakota plains, on prairie land. His life growing up was farm life.  As a little boy, he raised a pet lamb, learned to ride horses, ran from over-protective roosters, and accompanied his father and hired men in routine work.  He was soon involved and the routine became natural.  Like other farm boys, he cannot tell you when he learned to drive: In his memory he was always driving, like he was always walking.

In his later youth, Willard’s responsibilities grew and his understanding of farm life deepened in spite of a profound goal to graduate high school, go to college, and make a life in something other than farming.

Willard has proven to be a consummate educator. After a stint teaching at the university level, he served corporate America as a professional trainer, focusing primarily on developing leaders.  Today, Willard serves as a coach for managers, leaders, and executives who seek to improve their effectiveness.

He is happily married and has three grown children who, along with Willard’s grand kids, occasionally enjoy hearing him recount long-ago farm stories.