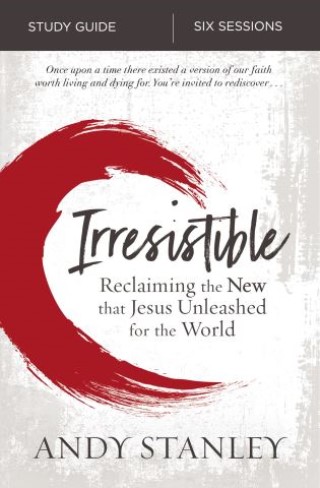 Reclaiming the New That Jesus Unleashed for the World

Once upon a time there was a version of our faith that was practically . . . irresistible.

But that was then. Today we preach, teach, write, and communicate as if nothing has changed. As if “The Bible says it” still settles it.

It’s time to hit pause on much of what we’re doing and consider the faith modeled by our first-century brothers and sisters who had no official Bible, no status, and humanly speaking, little chance of survival.

What made their message so compelling, so defensible, so irresistible?

What did they know that we don’t?

Buckle up . . . you’re about to find out. In this six-session video study, Andy Stanley will invite you to embrace the version of faith that, against all odds, initiated a chain of events resulting in the most significant and extensive cultural transformation the world has ever seen. A version we must embrace if we are to be salt and light in an increasingly savorless and dark world.

Communicator, author, and pastor Andy Stanley founded Atlanta-based North Point Ministries in 1995. Today, NPM consists of six churches in the Atlanta area and a network of more than 90 churches around the globe that collectively serve nearly 185,000 people weekly.

As host of Your Move with Andy Stanley, which delivers over seven million messages each month through television and podcasts, and author of more than 20 books, including The New Rules for Love, Sex & Dating; Ask It; How to Be Rich; Deep & Wide; and Irresistible, he is considered one of the most influential pastors in America.

Andy and his wife, Sandra, have three grown children and live near Atlanta.