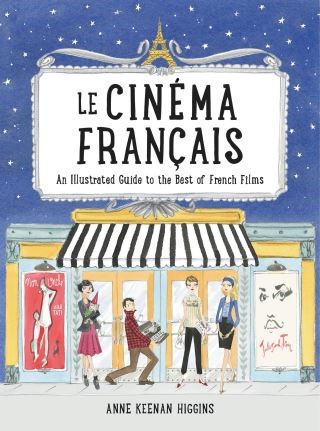 An Illustrated Guide to the Best of French Films

Le Cinéma Français is an irresistible illustrated guide and primer to the best of French films, starting with the 1950s, through the spectrum of French New Wave, and on to modern-day confections.

Starring the likes of Brigitte Bardot, Catherine Deneuve, and Jeanne Moreau, and directed by iconoclasts such as Francois Truffaut, Eric Rohmer, and Jean-Luc Godard, French movies are as touching, beautiful, and romantic as they come in all of film. Le Cinéma Français captures their spirit in whimsical detail. Each movie is covered with a plot summary; back stories; and illustrations by author/artist Anne Keenan Higgins of highlight scenes, costumes, props, and characters that are as enchanting as the films themselves.

This gorgeously gifty tribute to French cinema is not just for movie buffs or followers of international films, but for all who are enchanted by French culture.