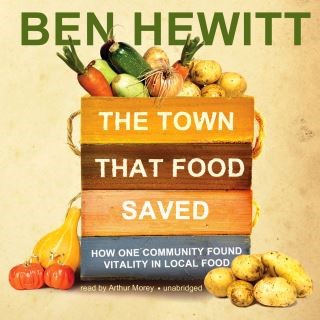 The Town That Food Saved

How One Community Found Vitality in Local Food

Over the past several years, Hardwick, Vermont, a typical hardscrabble farming community of three thousand residents, has jump-started its economy and redefined its self-image through a local, self-sustaining food system unlike anything else in America. Even as the recent financial downturn threatens to cripple small businesses and privately owned farms, a stunning number of food-based businesses have grown in the region—Vermont Soy, Jasper Hill Farm, Pete’s Greens, Patchwork Farm & Bakery, Applecheek Farm, Claire’s Restaurant and Bar, and Bonnieview Farm, to name only a few. The mostly young entrepreneurs have created a network of community support, meeting regularly to share advice, equipment, and business plans and to loan each other capital. Hardwick is fast becoming a model for other communities hoping to replicate its success.

Hewitt, a journalist and Vermonter, delves deeply into the repercussions of this groundbreaking approach to growing food, both its astounding successes and potential limitations. The captivating story of a small town coming back to life, The Town That Food Saved is narrative nonfiction at its best, full of colorful characters and grounded in an idea that will revolutionize the way we eat.