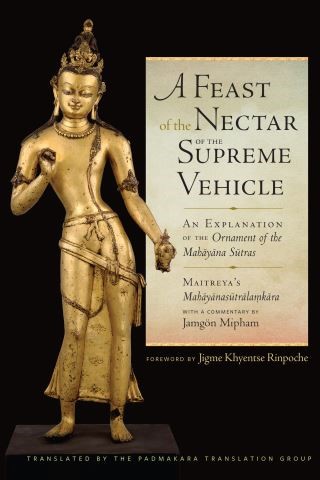 A Feast of the Nectar of the Supreme Vehicle

An Explanation of the Ornament of the Mahayana Sutras

A full translation of an important Mahāyāna Buddhist treatise with a commentary by the famous Tibetan luminary Jamgön Mipham.

A monumental work and Indian Buddhist classic, the Ornament of the Mahāyāna Sūtras (Mahāyānasūtrālaṃkāra) is a precious resource for students wishing to study in-depth the philosophy and path of Mahāyāna Buddhism. This full translation and commentary outlines the importance of Mahāyāna, the centrality of bodhicitta or the mind of awakening, the path of becoming a bodhisattva, and how one can save beings from suffering through skillful means.

This definitive composition of Mahāyāna teachings was imparted in the fourth century by Maitreya to the famous adept Asaṅga, one of the most prolific writers of Buddhist treatises in history. Asaṅga’s work, which is among the famous Five Treatises of Maitreya, has been studied, commented upon, and taught by Buddhists throughout Asia ever since it was composed.

In the early twentieth century, one of Tibet’s greatest scholars and saints, Jamgön Mipham, wrote A Feast of the Nectar of the Supreme Vehicle, which is a detailed explanation of every verse. This commentary has since been used as the primary blueprint for Tibetan Buddhists to illuminate the depth and brilliance of Maitreya’s pith teachings. The Padmakara Translation Group has provided yet another accessible and eloquent translation, ensuring that English-speaking students of Mahāyāna will be able to study this foundational Buddhist text for generations to come.

Mipham Rinpoche: JAMGÖN MIPHAM (1846-1912) was a Tibetan Buddhist master of outstanding brilliance and versatility. He is a famous Nyingma master of the Rimé tradition and is one of the greatest philosophers Tibet has ever produced.

The PADMAKARA TRANSLATION GROUP, based in France, has a distinguished reputation for all its translations of Tibetan texts and teachings. Its work has been published in several languages and is renowned for its clear and accurate literary style.