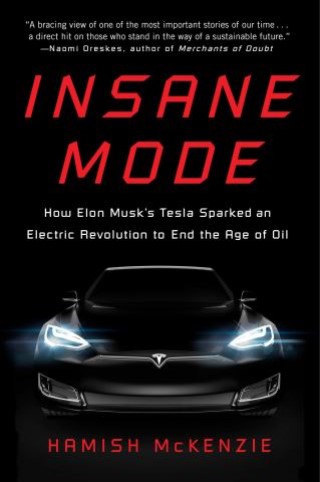 “You’ll tell me if it ever starts getting genuinely insane, right?”—Elon Musk, TED interview

Hamish McKenzie tells how a Silicon Valley start-up's wild dream came true. Tesla is a car company that stood up against not only the might of the government-backed Detroit car manufacturers but also the massive power of Big Oil and its benefactors, the infamous Koch brothers.

The award-winning Tesla Model 3, a premium mass-market electric car that went on sale in 2018, has reconfigured the popular perception of Tesla and continues to transform the public's relationship with motor vehicles—much like Ford's Model T did nearly a century ago. At the same time, company CEO Elon Musk courts controversy and spars with critics through his Twitter account, just as Tesla's ever-increasing debt teeters on junk bond status....

As McKenzie's rigorously reported account shows, Tesla has triggered frenzied competition from newcomers and traditional automakers alike, but it retains an edge because of its expansive infrastructure and the stupendous battery factory it built in the Nevada desert. The popularity of electric cars is growing around the world, especially in China, and McKenzie interviews little-known titans who have the money and the market access to power a global electric car revolution quickly and decisively.

Insane Mode started off as a feature on the dual-motor Tesla Model S, which gave the car Ferrari-like acceleration, but it's also the perfect description of the operating cycle of a company that has sworn it won't rest until every car on the road is electric. Here is a story about the very best kind of American ingenuity and its history-making potential. Buckle up!

Hamish McKenzie: Hamish McKenzie is a writer from New Zealand who lives in San Francisco. He has worked in communications for Tesla and Kik and was previously a journalist whose primary interests were technology and social issues. He is the cofounder of Substack, a subscription publishing start‑up.