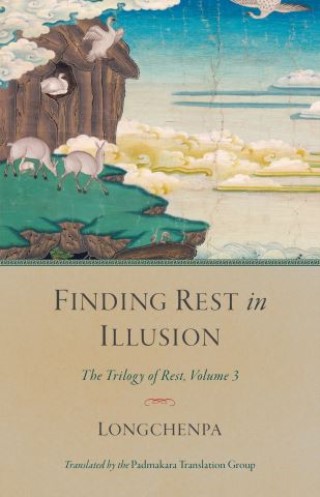 The Trilogy of Rest, Volume 3

A new translation of the Tibetan master Longchenpa's famous work that systematically presents the path of yogic conduct according to the Dzogchen tradition.

Finding Rest in Illusion is the third volume of the Trilogy of Rest, Longchenpa’s classic exposition of the Buddhist path. The purpose of these teachings is to introduce us to our most basic nature—the clear and pristine awareness that is the nature of the mind. According to the traditional Tibetan Buddhist formula of view, meditation, and action, this volume follows Finding Rest in the Nature of the Mind, which establishes the view of the Buddhist path generally, and specifically that of the teachings of the Great Perfection, and Finding Rest in Meditation, which outlines the main points of meditation, namely, where one should meditate, what qualities a practitioner should possess and develop, and what should be practiced.

The Padmakara Translation Group has provided us with a clear and fluid new translation of the final volume of the trilogy, Finding Rest in Illusion, along with its autocommentary, The Chariot of Excellence, both intended to elucidate the appropriate action of a Buddhist practitioner. Finding Rest in Illusion describes in detail the conduct of those who have stabilized their recognition of the nature of the mind and how to apply the Buddhist view when relating to ordinary appearances. Drawing extensively from classic Buddhist works, the author uses well-known examples of illusion found throughout Mahāyāna literature to illustrate the illusory nature of both saṃsāra and nirvāṇa, thus revealing their ultimate nondual nature. This is an invaluable manual for any genuine student of Buddhism who wishes to truly find rest through the path of the Great Perfection.

Longchenpa: LONGCHEN RABJAM (1308–1363), also known as Longchenpa, is a great luminary of Tibetan Buddhism. He was highly skilled in all aspects of scholarship from an early age and excelled throughout his life in the practice and accomplishment of the Dharma. Regarded as a great Dzogchen master, Longchenpa had many pure visions where he was given direct instructions from Guru Padmasambhava and is recognized as an emanation of Vimalamitra. Longchenpa’s prolific writings have made him one of Tibet’s most renowned and precious teachers.

The PADMAKARA TRANSLATION GROUP, based in France, has a distinguished reputation for all its translations of Tibetan texts and teachings. Its work has been published in several languages and is renowned for its clear and accurate literary style.