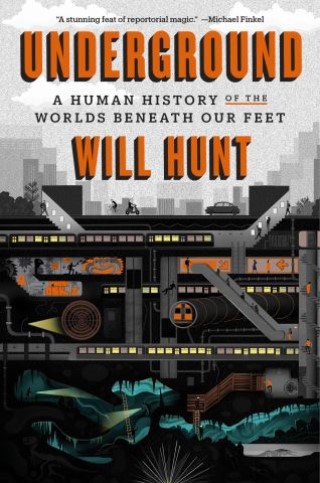 A Human History of the Worlds Beneath Our Feet

“[A] winningly obsessive history of our relationship with underground places” (The Guardian), from sacred caves and derelict subway stations to nuclear bunkers and ancient underground cities—an exploration of the history, science, architecture, and mythology of the worlds beneath our feet

NAMED ONE OF THE BEST BOOKS OF THE YEAR BY NPR

When Will Hunt was sixteen years old, he discovered an abandoned tunnel that ran beneath his house in Providence, Rhode Island. His first tunnel trips inspired a lifelong fascination with exploring underground worlds, from the derelict subway stations and sewers of New York City to sacred caves, catacombs, tombs, bunkers, and ancient underground cities in more than twenty countries around the world. Underground is both a personal exploration of Hunt’s obsession and a panoramic study of how we are all connected to the underground, how caves and other dark hollows have frightened and enchanted us through the ages.

In a narrative spanning continents and epochs, Hunt follows a cast of subterraneaphiles who have dedicated themselves to investigating underground worlds. He tracks the origins of life with a team of NASA microbiologists a mile beneath the Black Hills, camps out for three days with urban explorers in the catacombs and sewers of Paris, descends with an Aboriginal family into a 35,000-year-old mine in the Australian outback, and glimpses a sacred sculpture molded by Paleolithic artists in the depths of a cave in the Pyrenees.

Each adventure is woven with findings in mythology and anthropology, natural history and neuroscience, literature and philosophy. In elegant and graceful prose, Hunt cures us of our “surface chauvinism,” opening our eyes to the planet’s hidden dimension. He reveals how the subterranean landscape gave shape to our most basic beliefs and guided how we think about ourselves as humans. At bottom, Underground is a meditation on the allure of darkness, the power of mystery, and our eternal desire to connect with what we cannot see.

“A mesmerizingly fascinating tale . . . I could not stop reading this beautifully written book.”—Michael Finkel, author of The Stranger in the Woods

“Few books have blown my mind so totally, and so often. In Will Hunt’s nimble hands, excursion becomes inversion, and the darkness turns luminous. There are echoes of Sebald, Calvino, and Herzog in his elegant and enigmatic voice, but also real warmth and humor. . . . An intrepid—but far from fearless—journey, both theoretically and terrestrially.”—Robert Moor, New York Times bestselling author of On Trails

Will Hunt: Will Hunt’s writing, photography, and audio storytelling have appeared in The Economist, The Paris Review Daily, Discover, The Atavist Magazine, and Outside, among other places. A recipient of grants and fellowships from the Thomas J. Watson Foundation, the New York Foundation for the Arts, the Bread Loaf Writers’ Conference, and the MacDowell Colony, he is currently a visiting scholar at the NYU Institute for Public Knowledge. Underground is his first book.