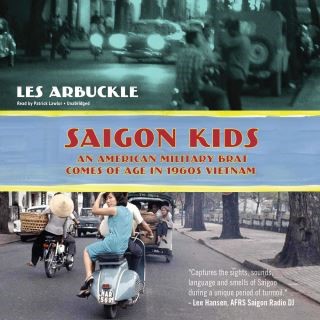 An American Military Brat Comes of Age in 1960s Vietnam

Looking for unusual coming-of-age books? The events leading up to the Vietnam War provide a fascinating backdrop for this coming-of-age tale with a twist.

In May 1962, Naval Chief Petty Officer Bryant Arbuckle flew to Saigon to establish a new armed forces radio station. Next to follow were his wife and three boys, Leslie among them. Saigon Kids is the candid, recondite slice of fourteen-year-old military brat Les Arbuckle's experience at the American Community School during the critical months of the Vietnam War when events would, quite literally, ignite in downtown Saigon. In 1963 Saigon was beautiful, violent, and dirty-and the most exciting place a fourteen-year-old American boy could live. Saigon offered a rich array of activities, and much to the consternation of their parents and teachers, Les and his fellow military brats explored the dangers with reckless abandon-running from machine gun fire, watching a Buddhist monk burn to death, visiting brothels late at night, trading currency on the black market.

When Les first arrives in Vietnam, he is a stranger in a strange land, expecting boredom in a country he doesn't know. But the American social scene is more vibrant than he expected. The American Community School is a mix of kids from all over the globe who arrived just as the fuse on Saigon was about to ignite. As the students continue their American lifestyle behind barbed wire, Saigon unravels in chaos and destruction. Despite this ugliness-an ever-present feature of everyday life-Les tells his story of teenage angst with humor and precocity.