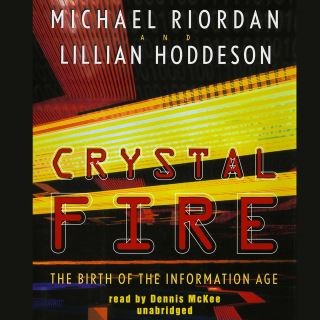 The Birth of the Information Age

On December 16, 1947, two physicists at Bell Laboratories, John Bardeen and Walter Brattain, jabbed two electrodes into a sliver of germanium half an inch long. The electrical power coming out of that piece of germanium was 100 times stronger than what went in. In that moment, the transistor was invented and the information age began.

Crystal Fire recounts the story of the transistor team at Bell Labs, led by William Shockley, who shared the Nobel Prize with Bardeen and Brattain. While his colleagues went on to other research, Shockley grew increasingly obsessed with the new gadget. He went on to form the first semiconductor company in what would become Silicon Valley.

Above all, Crystal Fire is a tale of the human factors in technology: the pride and jealousies coupled with scientific and economic aspirations that led to the creation of modern microelectronics and ignited the greatest technological explosion in history.