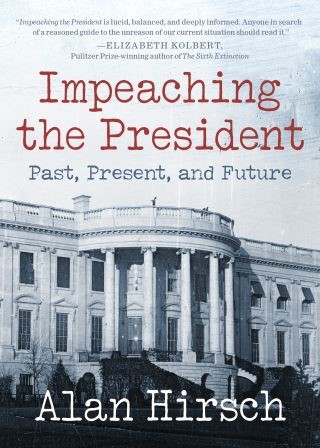 Past, Present, and Future

An historical look at the practice of impeachment, how it impacted the terms of Presidents Johnson, Nixon, and Clinton, and how it may affect Donald Trump.

"Impeaching the President is lucid, balanced, and deeply informed. Anyone in search of a reasoned guide to the unreason of our current situation should read it."—Elizabeth Kolbert, Pulitzer Prize-winning author of The Sixth Extinction

"Ousting a president is a complicated and uncertain endeavor, according to this perceptive study of impeachments. . . . [This book] shrewdly assesses the impeachability of President Trump based on his alleged offenses . . . . Hirsch's lucid prose and careful analysis make the book a fine corrective to cavalier popular rhetoric surrounding discussions of impeachment."-- Publishers Weekly

"Amid the partisan passion, an illuminating primer of analysis and context lowers the temperature on this hot-button issue. . . . A cogent analysis that builds a common-sense case for proceeding with caution and against using impeachment as a partisan weapon."--Kirkus Reviews

" The reader gets a hearty mix of American history, political intrigue, and constitutional law, all adhered with Hirsch's amazing writing. He captures the political chaos surrounding each prior case, yanking the reader out of our present exceptionalism to see the evolution of impeachment with the proper context and clarity. Can't recommend it enough."--Travis Cohen, Brookline Booksmith, MA

"In an era when the notion of impeachment is tossed around as the ultimate political indictment, Alan Hirsch guides us with a steady hand through our own history to consider the three presidents who faced that ultimate punishment. This is a sober, precise, and carefully argued analysis that should be read by every member of Congress—and every president."—David K. Shipler, former reporter for the New York Times and Pulitzer Prize recipient

"Alan Hirsch brings clarity, wisdom, and wit to a contentious and critical subject. Impeaching the President is must reading for all concerned citizens."—Howard Shapiro, former FBI General Counsel

It seems quite possible that President Trump will be impeached. Concerns about connections with Russia's attack on our elections, obstruction of justice, illicit business deals, and compromised classified intelligence dominate the news. Robert Mueller's fast-moving investigation has already resulted in arrests, indictments, guilty pleas, and high-level cooperating witnesses. Anything can happen.

In response to the complexity of a rapidly evolving situation, constitutional scholar Alan Hirsch offers clear and to-the-point guidance for all matters relating to removing a sitting president—from the Founder's constitutional protections against executive criminality, and the instructive impeachment stories of presidents Andrew Johnson, Richard Nixon, and Bill Clinton, to the particular ways that Donald Trump may be legally vulnerable, and the possibilities and limitations of presidential self-pardon.

Illustrated throughout with historical engravings, photographs, and other impeachment documentation, Impeaching the President does not advocate for any particular course of action, nor make any predictions about Trump's future. Rather, this concise, timely, and accessible analysis offers historical lessons and a perspective on how the Constitution provides stability during times of political uncertainty and crisis.