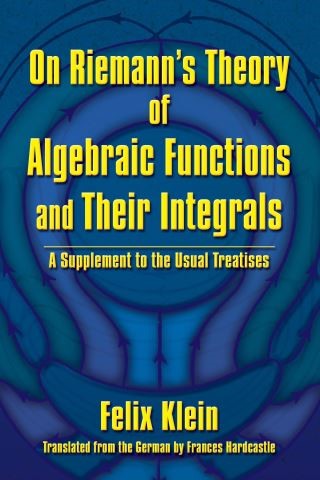 On Riemann's Theory of Algebraic Functions and Their Integrals

A Supplement to the Usual Treatises

A great researcher, writer, and teacher in an era of tremendous mathematical ferment, Felix Klein (1849–1925) occupies a prominent place in the history of mathematics. His many talents included an ability to express complicated mathematical ideas directly and comprehensively, and this book, a consideration of the investigations in the first part of Riemann's Theory of Abelian Functions, is a prime example of his expository powers.
The treatment introduces Riemann's approach to multiple-value functions and the geometrical representation of these functions by what later became known as Riemann surfaces. It further concentrates on the kinds of functions that can be defined on these surfaces, confining the treatment to rational functions and their integrals. The text then demonstrates how Riemann's mathematical ideas about Abelian integrals can be arrived at by thinking in terms of the flow of electric current on surfaces. Klein's primary concern is preserving the sequence of thought and offering intuitive explanations of Riemann's notions, rather than furnishing detailed proofs. Deeply significant in the area of complex functions, this work constitutes one of the best introductions to the origins of topological problems.