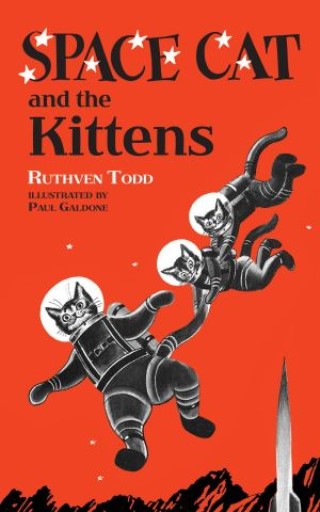 Space Cat and the Kittens

"Paul Galdone's pictures, especially of the kittens in their space suits, have humor and imagination to match the text." — Saturday Review
Flyball, the famous Space Cat, is a father now! He and Moofa, the last of the Martian fishing cats, are the proud parents of a pair of mischievous, fun-loving kittens, Marty and Tailspin. The whole family joins Colonel Fred Stone and a new friend, Bill, on a mission to Alpha Centauri to seek out places where humans can live. Along the way, the crew makes an amazing discovery — a planet abounding in iguanodons, pterodactyls, tyrannosauri, and a host of other prehistoric creatures.
"Paul Galdone's pictures ... have humor and imagination to match the text," noted the Saturday Review of this charmingly illustrated storybook, the last of a four-book series starring the intrepid feline known as Space Cat. Young readers will delight in taking a look at space exploration from Flyball's point of view and following his escapades across the solar system.