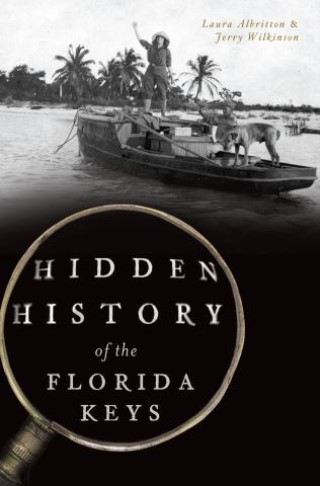 Hidden History of the Florida Keys

The Florida Keys have witnessed all kinds of historical events, from the dramatic and the outrageous to the tragic and the comic. In the nineteenth century, uncompromising individuals fought duels and plotted political upsets. During the Civil War, a company of "Key West Avengers" escaped their Union-occupied city to join the Confederacy by sailing through the Bahamas. In the early twentieth century, black Bahamians founded a town of their own, while railway engineers went up against the U.S. Navy in a bid to complete the Overseas Railroad. When Prohibition came to the Keys, one defiant woman established a rumrunning empire that dominated South Florida. Join Laura Albritton and Jerry Wilkinson as they delve into tales of treasure hunters, developers, exotic dancers, determined preservationists and more from the colorful history of the Florida Keys.

Laura Albritton: Fifth-generation Floridian Laura Albritton is a writer, book reviewer and writing teacher. Her work has appeared in publications such as the Miami Herald, Sculpture magazine, Harvard Review and the Florida Keys Weekly, while her award-winning short fiction has been published in many literary journals. She wrote the travel book Miami for Families (University Press of Florida) and co-authored Marathon: The Middle Keys and Key West's Duval Street (Arcadia Publishing) with Jerry Wilkinson. Laura holds a degree in comparative literature from Columbia and an MFA in creative writing from the University of Miami.

Fourth-generation Floridian Jerry Wilkinson arrived in Key West in 1947. He served in the U.S Air Force for twenty-four years before operating his own business. For decades, Jerry has researched and documented Florida Keys history, particularly that of the Upper Keys. He has contributed to books, films and television programs and created an extensive Keys history website (www.keyshistory.org). Jerry is president of the Historical Preservation Society of the Upper Keys and serves on the boards of the Historic Florida Keys Foundation and the Florida Keys History and Discovery Center. Jerry's previous books include Key Largo and Islamorada, co-authored with Brad Bertelli.