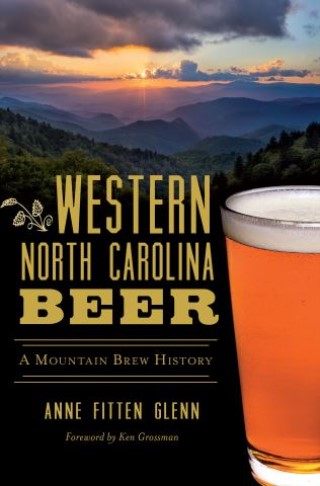 Over the past two hundred years, Western North Carolina has evolved from a mountainous frontier known for illicit moonshine production into a renowned destination for craft beer. Follow its story from the wild days of saloons and the first breweries of the 1870s through one of the longest Prohibitions in the nation. Eventually, a few bold entrepreneurs started the first modern breweries in Asheville, and formerly dry towns and counties throughout the region started to embrace the industry. The business of beer attracts jobs, tourists and dollars, as well as mixed emotions, legal conundrums and entrepreneurial challenges. Join award-winning beer writer Anne Fitten Glenn as she narrates the storied history of brewing in Western North Carolina.

Anne Fitten Glenn: Anne Fitten Glenn has been writing about and working in the beer business on and off since the 1990s. She pens a regular "Mountain Brews" article for Edible Asheville and has written for numerous other publications and outlets, including All About Beer, Smoky Mountain Living, the Asheville Citizen-Times, Mountain Xpress and CraftBeer.com. She served on the Asheville Brewers Alliance Board of Directors for almost five years and was a founding organizer of Asheville Beer Week. The History Press published her first beer book, Asheville Beer: An Intoxicating History of Mountain Brewing, in 2012.