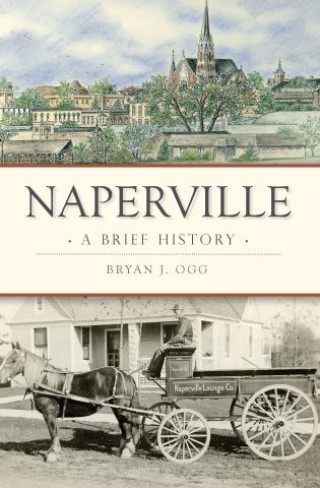 Since Naperville sprang from the northern Illinois prairie, it has maintained an unmistakably fascinating heritage. The settlers who followed the Napers to the DuPage River had to endure the hardships of felling trees and plowing prairies to make a place to call home. The campuses of the Research and Technology corridor might seem pretty far removed from the travails of those early years, but both are part of the same determined community. That shared tradition holds surprises even for lifelong residents of Naperville, such as the location of the Stenger Brewery or the legacy of Peter Kroehler, furniture tycoon, mayor and philanthropist. Bryan Ogg takes stock of the unique people and memorable events that shaped Naperville from its humble founding through its current thriving state.

Bryan J. Ogg: History is in Bryan Ogg's blood. For more than a decade, he served as curator of research at Naper Settlement, a living history museum in Naperville, Illinois. Prior to beginning his career in Naperville, Bryan taught history courses at Illinois Central College in East Peoria, Illinois, and was a member of the staff at the Peoria Historical Society. Other published works of Bryan's include Peoria Spirits: The Story of Peoria's Brewing and Distilling History; Wish You Were Here: Peoria Edition; and several editions of a monthly column entitled "The Curious Curator" for the Positively Naperville newspaper. He is a frequent guest lecturer at local schools and colleges, service groups, clubs and organizations.