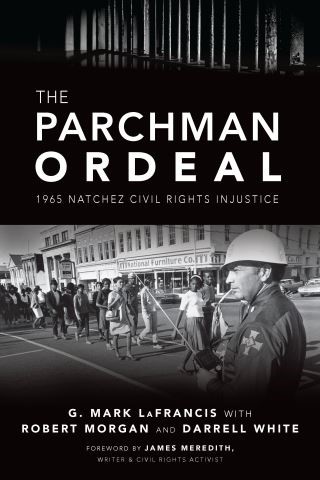 In October 1965, nearly 800 young people attempted to march from their churches in Natchez to protest segregation, discrimination and mistreatment by white leaders and elements of the Ku Klux Klan. As they exited the churches, local authorities forced the would-be marchers onto buses and charged them with "parading without a permit," a local ordinance later ruled unconstitutional. For approximately 150 of these young men and women, this was only the beginning. They were taken to the Mississippi State Penitentiary in Parchman, where prison authorities subjected them to days of abuse, humiliation and punishment under horrific conditions. Most were African Americans in their teens and early twenties. Authors G. Mark LaFrancis, Robert Morgan and Darrell White reveal the injustice of this overlooked dramatic episode in civil rights history.

G. Mark LaFrancis: G. Mark LaFrancis has been a writer and photographer for more than thirty years, mostly in journalism. His most recent award-winning film, The Parchman Ordeal: The Untold Story, was created from an oral history project sponsored by the Mississippi Humanities Council. He is a retiree of the U.S. Armed Forces, which he served for twenty-three years in the U.S. Air Force, Air National Guard and Air Force Reserve. He is the self-published author of eight books, five for young readers, and has mentored young writers for the past twenty years. Mark also is the founder and president of the Home with Heroes Foundation Inc., a private nonprofit organization dedicated to helping veterans and their families. Mark lives in Natchez with his wife, Eileen. They have two grown children, Mark and Mary.

Robert A. Morgan is a thirty-year U.S Air Force Military Veteran who lives in Natchez, Mississippi. Morgan holds a master's degree in human resources management from Troy State University and an undergraduate degree in business management from St. Leo College. In his spare time, Morgan enjoys gardening and do-it-yourself work with his wife, Lou. He was co-producer of the award-winning documentary The Parchman Ordeal: The Untold Story and works in partnership with New Dawn Video Productions and the Natchez Association for the Preservation of Afro-American History and Culture.

Darrell S. White is director of cultural tourism for the City of Natchez, as well as director of the Natchez Museum of African-American History and Culture. He is widely recognized as an authority in African American history in the Natchez region and has contributed to many publications, pamphlets, reenactments and programs about African American history. He was co-producer and narrator of the award-winning documentary The Parchman Ordeal: The Untold Story. A New York native, he lives in Natchez with his wife, Bell.