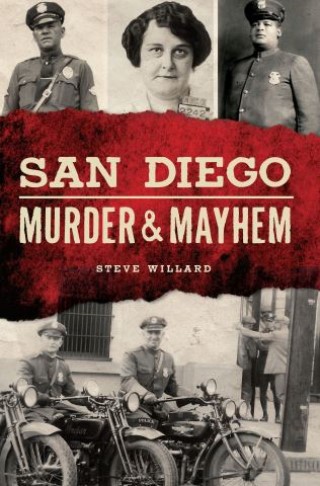 Early twentieth-century San Diego was growing fast, and the officers sworn to protect the city encountered more than their fair share of wily lawbreakers. From a shootout with a lone gunman in Mission Hills to gunfights with a gang of bank robbers that involved enthusiastic bystanders hoping to assist, detectives and patrolmen alike tried to maintain the peace. They encountered unexpected bodies, confronted car thieves and pursued criminals through neighboring states and into Mexico. Join author Steve Willard as he unearths stories directly from the case files of the early San Diego Police Department.

Steve Willard: A San Diego resident since 1977, author Steve Willard joined the SDPD in 1985 and has worked patrol, crime prevention/public affairs, the detective bureau, the Traffic Division and management. He became a charter member of the San Diego Police Museum in 1997 and is the historian of the San Diego Police Officers Association. A reoccurring columnist in two law enforcement periodicals, Steve has authored three books on SDPD history and has consulted on a number of other historical projects.