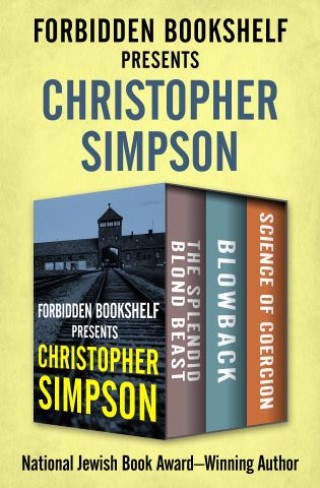 The Splendid Blond Beast, Blowback, and Science of Coercion

Three provocative exposés from a National Jewish Book Award–winning journalist address the CIA’s recruitment of Nazis and use of psychological warfare.

The Splendid Blond Beast: This groundbreaking investigation into the CIA’s post–World War II liberation and recruitment of Nazi war criminals—including the pivotal role played by CIA director Allen Dulles—traces the roots not only of US government malfeasance, but of mass murder as an instrument of financial gain and state power, from the Armenian genocide during World War I to Hitler’s Holocaust through the practice of genocide today.

Blowback: The true story of how US intelligence organizations employed Nazi war criminals in clandestine warfare and propaganda against the USSR, anticolonial revolutionaries, and progressive movements worldwide that were claimed to be Soviet pawns.

“The story is one that needs to be told, and Blowback makes a major contribution to its telling, supplementing a thorough collation of known cases with ample new research.” —The New York Times

Science of Coercion: Drawing on long-classified documents from the Pentagon, the CIA, and other national security agencies, Simpson exposes secret government-funded research into psychological warfare and reveals that many of the most respected pioneers in the field of communication science were knowingly complicit as their findings were employed for the purposes of propaganda, subversion, intimidation, and counterinsurgency during the Cold War era.

“An intriguing picture of the relations between state power and the intellectual community.” —Noam Chomsky, Massachusetts Institute of Technology

Christopher Simpson:
Christopher Simpson is a veteran reporter, historian, and analyst who teaches at American University’s School of Communication in Washington, DC. His work has won national awards for investigative journalism, history, and literature, and has been published in more than a dozen languages. Current study includes technology, democracy, revolution, and peer learning.