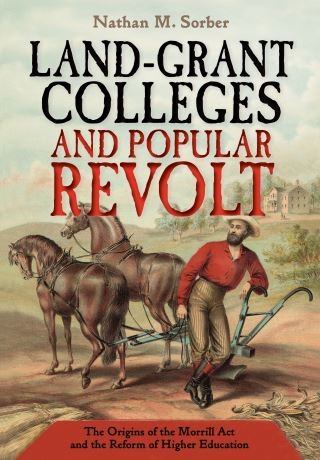 The land-grant ideal at the foundation of many institutions of higher learning promotes the sharing of higher education, science, and technical knowledge with local communities. This democratic and utilitarian mission, Nathan M. Sorber shows, has always been subject to heated debate regarding the motivations and goals of land-grant institutions. In Land-Grant Colleges and Popular Revolt, Sorber uncovers the intersection of class interest and economic context, and its influence on the origins, development, and standardization of land-grant colleges.

The first land-grant colleges supported by the Morrill Act of 1862 assumed a role in facilitating the rise of a capitalist, industrial economy and a modern, bureaucratized nation-state. The new land-grant colleges contributed ideas, technologies, and technical specialists that supported emerging industries. During the populist revolts chronicled by Sorber, the land-grant colleges became a battleground for resisting many aspects of this transition to modernity. An awakened agricultural population challenged the movement of people and power from the rural periphery to urban centers and worked to reform land-grant colleges to serve the political and economic needs of rural communities. These populists embraced their vocational, open-access land-grant model as a bulwark against the outmigration of rural youth from the countryside, and as a vehicle for preserving the farm, the farmer, and the local community at the center of American democracy.

Sorber's history of the movement and society of the time provides an original framework for understanding the origins of the land-grant colleges and the nationwide development of these schools into the twentieth century.