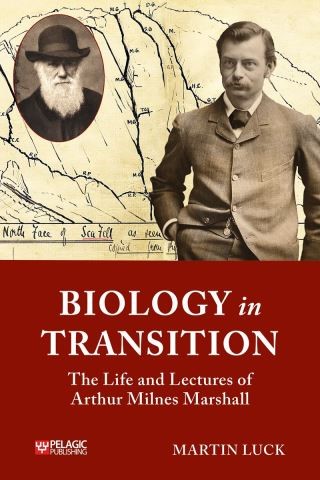 The Life and Lectures of Arthur Milnes Marshall

Arthur Milnes Marshall was a 19th-century scientist who gave lectures addressing the biological debates of his time. They covered topics including evolution, embryology, development and inheritance, with Charles Darwin’s name and those of other important biologists distributed liberally throughout.

Marshall was a zoologist, embryologist, anatomist and Darwin enthusiast, as well as an accomplished mountaineer and sportsman. He was a humanist, an admired academic teacher and brilliant public educator. The lectures reveal his passion for communicating his subject, to his students and to the working men and women of Manchester, and they provide a remarkable snapshot of the state of biological science at the close of the 19th century.

His death in 1893 aged only 41, on a climbing expedition in the Lake District, left a fascinating time capsule in the form of lectures from a critical transitional period in the history of biology. Evolution by natural selection was the established doctrine but genes were undefined, with Mendel’s work yet to be recognised. Embryology was suggesting recapitulation but ancestry, genetics and missing links awaited liberation from theoreticians and the stones of palaeontology. Microscopy was flourishing and cell science was finding its feet, but DNA and molecular science were far in the future.

Had Marshall lived and worked into the 20th century, these lectures would undoubtedly have been superseded and forgotten. Instead, they reveal biology’s transformation from a descriptive exercise to an experimental science, its rejection of purpose and design in evolution, and the shift of its axis from continental Europe to Britain and the United States.

Professor Martin Luck discovered these lectures (published by CF Marshall in two volumes shortly after his brother’s death) languishing in a university corridor. His careful curation, introductions to each lecture and copious annotations on the organisms, theories and scientists discussed, illuminate their significance as prequels to modern biology. Marshall’s own story brings the lectures and their social context into sharp relief.

Biology in Transition will interest anyone curious about the history of science, especially biology, evolution, genetics and its 19th-century pioneers.