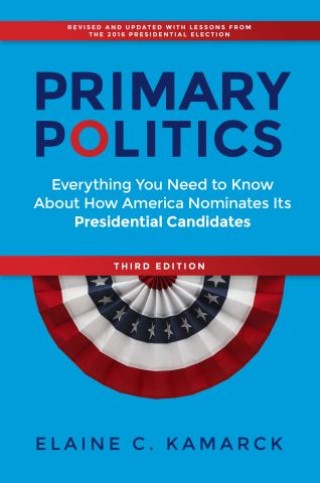 The 2020 presidential primaries are on the horizon and this third edition of Elaine Kamarck’s Primary Politics will be there to help make sense of them. Updated to include the 2016 election, it will once again be the guide to understanding the modern nominating system that gave the American electorate a choice between Donald Trump and Hilary Clinton.

In Primary Politics, political insider Elaine Kamarck explains how the presidential nomination process became the often baffling system we have today, including the “robot rule.” Her focus is the largely untold story of how presidential candidates since the early 1970s have sought to alter the rules in their favor and how their failures and successes have led to even more change. She describes how candidates have sought to manipulate the sequencing of primaries to their advantage and how Iowa and New Hampshire came to dominate the system. She analyzes the rules that are used to translate votes into delegates, paying special attention to the Democrats' twenty-year fight over proportional representation and some of its arcana.

Drawing on meticulous research, interviews with key figures in both parties, and years of experience, this book explores one of the most important questions in American politics—how we narrow the list of presidential candidates every four years.