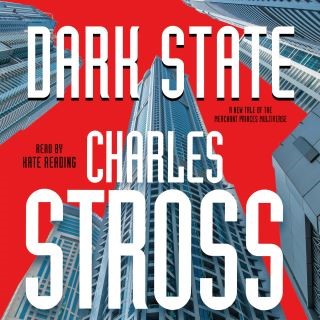 Dark State ups the ante on the already volatile situations laid out in the sleek techno-thriller Empire Games, the start to Stross' new story-line and a perfect entry point for new listeners, in The Merchant Princes series.

In the near-future, the collision of two nuclear superpowers across timelines, one in the midst of a technological revolution and the other a hyper-police state, is imminent. In Commissioner Miriam Burgeson’s timeline, her top level agents run a high risk extraction of a major political player. Meanwhile, a sleeper cell activated in Rita's, the Commissioner's adopted daughter and newly-minted spy, timeline threatens to unravel everything.

With a penchant for intricate world-building and an uncanny ability to realize alternate history and technological speculation, Stross' prose will captivate listeners who like hi-tech thrillers, inter-dimensional political intrigue, and espionage.

Charles Stross: Charles Stross is the author of the bestselling Merchant Princes series, the Laundry series, and several stand-alone novels including Glasshouse, Accelerando, and Saturn's Children. Born in Leeds, England, in 1964, Stross studied in London and Bradford, earning degrees in pharmacy and computer science. Over the next decade and a half he worked as a pharmacist, a technical writer, a software engineer, and eventually as a prolific journalist covering the IT industry. His short fiction began attracting wide attention in the late 1990s; his first novel, Singularity Sky, appeared in 2003. He has subsequently won the Hugo Award twice. He lives with his wife in Edinburgh, Scotland, in a flat that is slightly older than the state of Texas.Kate Reading is the recipient of multiple AudioFile Earphones Awards and has been named by AudioFile magazine as a “Voice of the Century,” as well as the Best Voice in Science Fiction & Fantasy in 2008 and 2009 and Best Voice in Biography & Culture in 2010. She has narrated works by authors as Jane Austen, Robert Jordan, Edith Wharton, and Sophie Kinsella. Reading has performed at numerous theaters in Washington D.C. and received a Helen Hayes Award for her performance in Aunt Dan and Lemon. AudioFile Magainze reports that, "With subtle control of characters and sense of pacing, Kate’s performances are a consistent pleasure.".