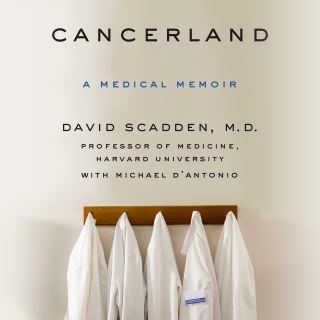 A doctor’s riveting story of loss and hope in the world of cancer.

What is it like to encounter cancer? How does it feel to face the unknown, to enter a world of hope, loss, and dread?

From the diagnosis of his childhood friend’s mother to his poignant memories in the lab, David Scadden’s seen the unknown world of cancer from the lens of a young boy, a classmate, a researcher, a friend, a doctor, and a neighbor. Scadden chronicles his personal memories of cancer – his visits to his sick neighbor and his classmate who left school and never came back.

Now Dr. David Scadden, co-founder of the Harvard Stem Cell Institute and one of the world's leading experts on immunology and oncology, writes his memoir, Cancerland, with Pulitzer Prize-winning journalist Michael D'Antonio. With riveting stories and moving compassion, Scadden and D’Antonio paint a still rapidly changing landscape in the context of all too common stories of loss. Ranging from Scadden’s personal childhood memories to his triumphs and regrets as a doctor, Scadden illuminates a light at the end of a dark tunnel.

Through opening a window into the science of medicine in the world of the unknown, Scadden and D’Antonio humanize cancer while inspiring action that we all so desperately need.

This program includes an introduction and post-script read by David Scadden.

"In Cancerland, Dr. Scadden brilliantly unravels the position cancer occupies in our collective history and consciousness with intimacy and candor...Cancerland depicts medicinal science as it truly is: humbling, heart-breaking, complex and inspiring." — Rana Awdish, author of In Shock

"Dr. David Scadden, a gifted physician scientist, has penned (with Michael D'Antonio) a dazzling and optimistic medical memoir that describes his personal life-long journey to use his scientific knowledge to combat one of the most complex diseases ever known and serve humanity. Scadden writes with humility, compassion and a sense of unbridled duty." — Sanjiv Chopra