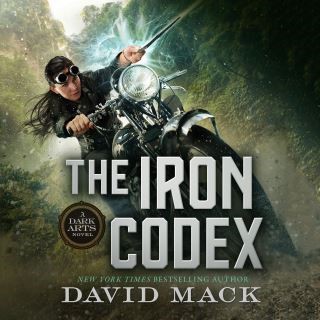 The Dark Arts series continues as the wizards of World War II become the sorcerers of the Cold War in David Mack's globe-spanning thriller, The Iron Codex, sequel to The Midnight Front.

1954: In South East Asia, Cade Martin, hero of the Midnight Front during World War II, chases ghosts and flees his past. In the United States, Briet Segfrunsdóttir heads the Pentagon’s top-secret magickal warfare program. And in South America, Anja Kernova hunts fugitive Nazi sorcerers with the help of a powerful magickal tome known as the Iron Codex.

In an ever-more dangerous world, a chance encounter sparks an international race to find Anja and steal the Iron Codex. Anja is hunted by friend and foe alike toward a showdown on Bikini Atoll in March 1954: the Castle Bravo nuclear test, where science and black magic are destined to collide.