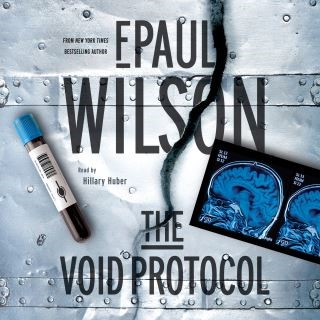 In The Void Protocol, New York Times bestselling author F. Paul Wilson concludes his medical thriller trilogy featuring Rick Hayden and Laura Fanning as they confront the entities responsible for the supernatural events of Panacea and The God Gene.

Something sits in a bunker lab buried fifty feet below the grounds of Lakehurst Naval Air Station.

The product of the Lange-Tür technology confiscated from the Germans after World War II occupies a chamber of steel-reinforced ballistic glass. Despite experimentation for nearly three-quarters of a century, no one knows what it is, but illegal human research reveals what it can do. Humans with special abilities have been secretly collected—abilities that can only have come from whatever occupies the underground bunker in Lakehurst.

And so it sits, sequestered on the edge of the New Jersey Pine Barrens, slowly changing the world.

F. Paul Wilson is the winner of the Career Achievement in Thriller Fiction in the 2017 RT Reviewers' Choice Best Book Awards.

F. Paul Wilson: F. Paul Wilson is the New York Times bestselling author of horror, adventure, medical thrillers, science fiction, and virtually everything in between. His books include the Repairman Jack novels—including Ground Zero, The Tomb, and Fatal Error—the Adversary cycle—including The Keep—and a young adult series featuring the teenage Jack. Wilson has won the Prometheus Award, the Bram Stoker Award, the Inkpot Award from the San Diego ComiCon, and the Lifetime Achievement Award of the Horror Writers of America, among other honors. He lives in Wall, New Jersey.F. PAUL WILSON is the New York Times bestselling author of the Repairman Jack novels and a winner of the Bram Stoker Award for Lifetime Achievement. He continues to practice as a physician and lives in Wall, New Jersey.