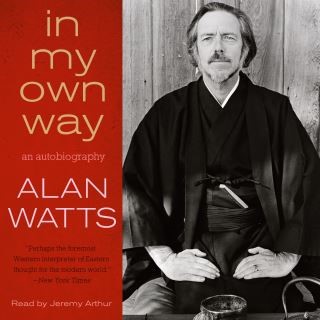 In My Own Way

Macmillan Audio presents In My Own Way, Alan Watts's acclaimed autobiography, published for the first time in audio.

In this audiobook, Alan Watts tracks his spiritual and philosophical evolution from a child of religious conservatives in rural England to a freewheeling spiritual teacher who challenged Westerners to defy convention and think for themselves. From early in this intellectual life, Watts shows himself to be a philosophical renegade and wide-ranging autodidact who came to Buddhism through the teachings of Christmas Humphreys and D. T. Suzuki.

Told in a nonlinear style, In My Own Way wonderfully combines Watts’ own brand of unconventional philosophy and often hilarious accounts of gurus, celebrities, psychedelic drug experiences, and wry observations of Western culture. A charming foreword written by Watts’ father sets the tone of this warm, funny, and beautifully written story of a compelling figure who encouraged seekers to “follow your own weird” — something he always did himself, as his remarkable account of his life shows.

Alan Watts: Alan Watts was instrumental in introducing Eastern thought to Western civilization. He held both a master's degree in theology and a doctorate of divinity, and is best known as an interpreter of Indian and Chinese philosophy and Zen Buddhism. He was the author of hundreds of articles on philosophy and religion, and 33 books that have been translated into eleven languages.Alan Wilson Watts (6 January 1915 - 16 November 1973) was a British-born American philosopher, writer, and speaker, best known as an interpreter and populariser of Eastern philosophy for a Western audience. Born in Chislehurst, England, he moved to the United States in 1938 and began Zen training in New York. Pursuing a career, he attended Seabury-Western Theological Seminary, where he received a master's degree in theology. Watts became an Episcopal priest in 1945, then left the ministry in 1950 and moved to California, where he joined the faculty of the American Academy of Asian Studies.